Despite adding new entries for over 15 years now (if one goes back all the way to my first blog, Transforming Seminarian), I try not to repeat work that I've already done very often, making exceptions only when I feel that my original feature was so far off of what I would do now that an update is worthwhile. In the case of BotCon 2005 Ricochet, I really didn't even do a feature, but rather only my second (and final) attempt at a Marvel Transformers Universe-style bio, and my original entry no longer even links to a legible bio, so I'd need to do an update just to provide a more current bio link. If you're interested, here is that bio, which simply reformats the text from the card provided with the original toy. 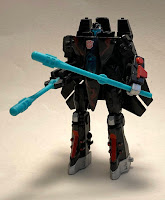 Ricochet has the distinction of being the first Fun Publications-era BotCon figure I ever acquired. Having been unable to afford either attending the convention in person, nor purchasing the non-attendee box set at that time, a fellow fan from one of the message boards offered to sell me her specimen, and I remain grateful.

Like nearly all BotCon exclusives, Ricochet reuses an existing mold, but this is a particularly good one. Ricochet's mold was first used for the Generation Two Cyberjet Hooligan from 1995. This means that the mold was already ten years old when it was used for Ricochet at BotCon 2005. Such longevity for a Transformers mold is fairly uncommon, and even more so for a non-G1 mold (later BotCon exclusives would equal or surpass this record, of course), but the Cyberjets were among the most highly-regarded molds to come out of the entire G2 line, and so the reuse of one of the Cyberjet molds here was by no means unwelcome. 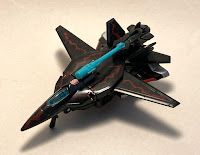 The character of Ricochet was created for BotCon 2005 by Benson Yee, who has been running the website bwtf.com for nearly 25 years now (the site is currently down as I write this, but it should be back up after renovations soon enough). In fact, Yee is said to have created Ricochet as a young fan. I have no information as to exactly when this would have been, and thus whether Ricochet was created to correspond to this exact mold, but it's possible. As the original Marvel comic was ending in the early 1990s, many fans active in that era joined a club called "TransMasters," in which it was common for members to create their own characters as alter egos. I had one of my own named "Starchaser," which I envisioned as a space cruiser, although I never did any artwork for it. Ben Yee was apparently also a member at that time, according to old club documents that I still have. Although the character he used as his "TransMasters" avatar was not Ricochet, the timing of the club just prior to G2 is intriguing. Who knows how many characters he created on his own before he finally got the chance to submit one of his creations officially?