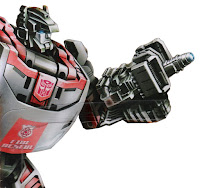 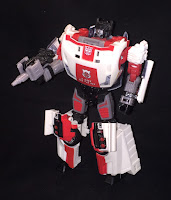 While Red Alert appeared in several episodes of the cartoon, only one ("Auto Berserk") featured him to any significant degree, and for that episode, Red Alert was the victim of an accident that fried his brain circuits, rendering him totally paranoid. Although this was very explicitly stated within the episode to be an abnormal state of affairs (and his condition is repaired by the episode's end), this state of paranoia has become the default personality that everyone knows him for. Granted, his tech specs do give him the function of "Security Director," and specify a certain level of attention to detail (they even say he's "edgy"), but nothing suggests the level of paranoia for which he's since become known (his characterization in the 2005-2019 IDW comics continuity brought this to even greater levels).

Red Alert's 2010 Generations toy is one of a dozen or so iterations of the character that have come out over the years. Like most of them, it is a remold of a previous Sideswipe toy, given a lightbar to suggest that he turns into a fire chief's car (although still quite improbably a Lamborghini-based car all-but certain to be well beyond most department budgets!). It is an attractive, if unlikely, look.