While the advent of the Beast Wars line in 1996 signaled a radical change for the Transformers franchise away from mechanical forms to organic animal alternate modes, expansions to the concept felt free to go back to existing molds from the pre-Beast era. Thus, the Beast Wars II line in Japan, which started in 1998 and helped buy time between seasons of their translation of the American Beast Wars cartoon, created toys such as Dirge using a mold created for Generation Two (but which didn't come out until the Machine Wars line, even in the US). Thrust followed suit by using the other jet mold from that series. 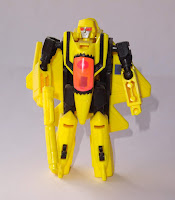 While it seems obvious that both Dirge and Thrust are named for two of the three "coneheads" from Generation One, these seem to be entirely unrelated characters, and no "Ramjet" was ever made to go with them, perhaps because there were only the two G2/MW jet molds available. It's not too much of a stretch to think of Dirge as a new character, as the head on that mold is fairly unremarkable, but Thrust's head is fairly obviously Megatron's head, as created for what became Machine Wars Megatron and his clone, Megaplex. Although my inability to understand Japanese means that I'm not well-versed in Beast Wars II beyond what I can learn from the TFWiki, I cannot tell that there was any effort made to explain the similarity, and the hand-drawn animation of the cartoon seems to have tried to de-emphasize the resemblance to Megatron by making Thrust's head a bit taller and narrower, but perhaps that's just me.

The yellow-and-black color scheme, at least, does serve to give Beast Wars II Thrust a fairly distinctive look, very different from either Megatron or Thrust's own G1 namesake. It's perhaps a bit similar to later G1 jets like Sunstorm (sometimes) and Nova Storm, but toys for these characters weren't created until several years after Thrust, so at least it was a distinctive look at the time.

Despite the obvious re-use of a mold clearly intended for another character, I find Beast Wars II Thrust to be an attractive toy, and later developments such as BotCon 2006's "pre-Beast Wars" set (most notably Waspinator as a jet) add an extra layer of meaning to the concept of "vehicular Predacons" that Thrust is one of the first representations of. Worth picking up if you can find him.