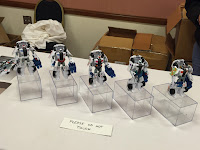 I had actually lined up another figure to feature today, but the announcement earlier in the week that BotCon will be returning in 2021 suggested a change in plans. I just had  to do some kind of retrospective. So I'm taking the opportunity to discuss the Customizing Class toy from what had previously been understood to be the final BotCon, in 2016: Combiner Wars Ratchet. 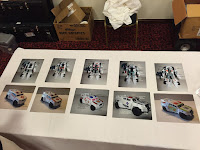 Since each person can paint their figure however they like, it is understood that no two Customizing Class toys are likely to be identical to each other. However, the 2016 Customizing Class was particularly unusual in this regard, in that it offered five "official" deco options. From left to right in this picture (and the one above), these are "Marvel Comics" Ratchet, "Cartoon" Ratchet, "G2" Ratchet*, "Shattered Glass" Ratchet, and "G1 Medix." A word of explanation regarding "G1 Medix" is in order. The original Medix hails from the Rescue Bots line of toys for preschoolers. Rescue Bots Medix's head is a close-if-you-squint match for the non-Ratchet head already on the sprues (used for the retail Combiner Wars First Aid figure that served as the basis for Ratchet), and thus was intended to give fans an option to use that head should they so desire. 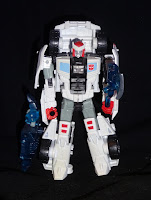 Long-time readers won't be surprised at all to learn that I chose to go for the "Marvel Comics" version of Ratchet, my favorite Transformers character, but of course my specimen isn't an exact match for the "official" version. It could never hope to be, given my comparative lack of skill (especially when compared to class organizer Shawn Tessmann), but I think I got the important parts right. 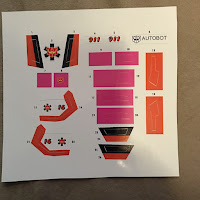 Besides differing paint applications, each "official" option for the Customizing Class toy had its own sticker sheet (well, the "Marvel Comics" and "Cartoon" versions used a single "G1" sheet). The sheet seen to the right here was for the "G2" option. Each class member was allowed to take two sheets (the "G1" sheet plus one other), in part to allow members to do another figure at home in their own time, but I'm sure the organizers were fully aware that many of us would sell or give away these extra sets to fans who couldn't make it to the convention, as I did with this sheet. I hope whoever made their "G2" Ratchet with these stickers enjoys it.

*It is understood that there has never been an actual G2 Ratchet. The class simply proposed a concept for what a G2 Ratchet might have been like, utilizing pink windows and orange details. 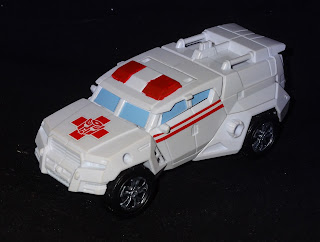