When offering an update to a classic Transformers character, there is always a bit of give-and-take in determining just how faithful one should be to the original toy. After all, some of the realities of the original design were determined by technological limitations that have since been overcome, allowing designers to offer toys with far greater articulation and/or fidelity to fictional character models that were never restrained by such real-world limitations. In addition, some characters attained popularity through their fictional appearances that they almost certainly would never have achieved on the basis of their original toy alone. Should strict fidelity to an inferior toy be maintained when creating an homage to such a character? These kinds of questions were almost certainly considered when creating the Generations Thunderwing toy. 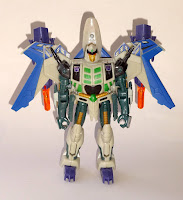 The original Thunderwing toy was a "Mega Pretender" (so designated because both the inner robot and the outer Pretender shell could transform) that I do not possess, as it has become one of the more expensive late-G1 toys to purchase precisely because of the character's popularity through his appearance in the Marvel comics Transformers series. While Thunderwing's status as a Pretender was acknowledged in those comics, his inner robot almost never appeared (and that sole appearance was in an issue of the UK series that the rest of the world never saw until many years later). The Generations toy thus largely ignores Thunderwing's Pretender status, and simply treats what used to be Thunderwing's Pretender shell as if it were the main robot, since this is the form most fans recognize.

Thunderwing's notoriety is based, in part, due to his status as the leader of the Decepticons on Cybertron for a time (the Marvel comics allowed several characters not specifically marketed as leaders this distinction. Indeed, the original toy's Tech Specs gave the character a rank of just "6" on a 10-point scale!), but mostly through his actions in the "Matrix Quest" storyline, during which Thunderwing actually took control of the Autobot Matrix of Leadership, thereby corrupting it and causing trouble for Autobots and Decepticons alike. This toy doesn't really have any specific call-backs to that storyline, but I feel I would be remiss in not mentioning it, as I question how well-known Thunderwing would be today without it. 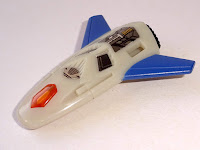 Hasbro did include a small homage to Thunderwing's Pretender origins by adding a small drone that can be detached from the nose of the toy's jet mode. This drone, itself, closely resembles the original toy's inner robot vehicle mode, but does not transform. Word is that the designers considered giving the drone a tiny robot mode, but it just didn't happen.

It should be noted that my specimen has been enhanced with what used to be called "Reprolabels." These are apparently still available at the toyhax.com website.
Posted by Mark Baker-Wright at 9:00 AM