When I first thought to do this entry, it was going to just be about Megaplex, a character that has only ever appeared (in America, at least) in the Machine Wars line.  But I quickly realized that I couldn't do a discussion of Megaplex properly without also talking about the Machine Wars version of Megatron.  So, even though each of these toys was available separately back in 1997, it's another "2-for-1" week here at Transforming Seminarian! 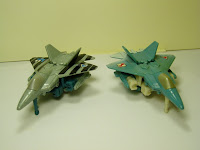 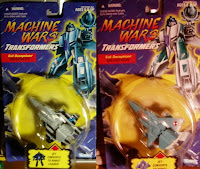 As I mentioned when I discussed Machine Wars Hoist, Kenner used each of the small Machine Wars molds for two toys each. Most of the time, it was enough to just slap a different name on each toy and be done with it, but since this toy was obviously intended to be the infamous Decepticon leader (as will be clear when we see the robot mode), the name-and-bio gurus decided that it would make sense to explicitly consider one of the Megatron-mold toys to be a clone of Megatron, apparently to be used as a decoy in battle.  The clone was called (in another fit of name creativity) "Megaplex."  Now, which one should be which?  This is where apparently even the folks at Kenner got confused.  The art for the blue robot was attached to the package that contained the gray toy, and vice versa.  This isn't just some packaging variation.  All Megaplexes and Megatrons were packaged in this way.  It seems reasonable to me that the designers intended for Megatron to the be gray toy (and Megaplex to therefore be the blue one), but the folks who put the toys in the packages apparently didn't get the memo. The toys pictured on the backs of the packages don't really help matters much, as the "Megaplex" toy pictured there is a black (or at least very dark) jet, and that deco wasn't ultimately used on these toys at all! 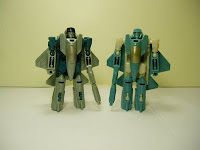 Anyway, even though Megatron had never been made available as a jet before (certain intentions — and even the Tech Specs on Machine Wars Megatron's package — notwithstanding) the head clearly signals that this is the familiar Decepticon leader (or, in the case of Megaplex, it signals that you're supposed to think this is the familiar Decepticon leader.  Confused yet?).  And if you think that Megatron should be gray, and/or that designer intentions matter more than the name actually given on the package, go ahead and consider Megatron the one on the left, instead of the one on the right.

Or is that what Megatron wants you to think?
Posted by Mark Baker-Wright at 12:00 AM