Over ten years ago, I did features on Overdrive and Camshaft, the two Omnibots I owned at the time. Omnibots, for those who may not recall, were "double change" Autobots who were available only by mail-order by sending in "robot points" found on retail Transformers. Only recently did I find the third Omnibot, Downshift, available at a reasonable price and pick it up. Now that I have finally completed my collection of G1 Omnibots, it is only right that I do a feature on Downshift here, as well. 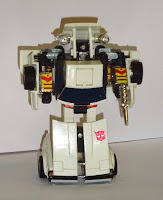 Now that I have Downshift in my hands, I quite like him, but I definitely put off getting him for years because he looked like the least interesting Omnibot in pictures and in drawings. These really didn't do him justice. While he's certainly shorter than your average Autobot of the era (as were the other Omnibots) and the placement of his head makes him look even shorter, I find it's actually a fairly solid look.

Downshift's main vehicle mode is a Toyota Celica Supra, and in fact early versions of this toy had a license plate that actually said "CELICA" on it. This was blacked out on later versions (including my own specimen). Even though toymakers were less assiduous about staying away from violating carmakers' trademarks back then, apparently this was considered a step too far, even at the time.

Downshift's weaponed-up "armored car" mode is, like that of his brothers, just a minor adjustment to the vehicle mode, but it's what sets him, and them, apart as Omnibots.

When I featured the other two Omnibots over a decade ago, I also included mock-up Tech Specs that I created in Photoshop, using text translated from the Japanese versions (I think Doug Dlin did the translation, but I can't find evidence of that now). I did such a mock-up for Downshift at the time, as well, and share it below. Note that this bio does not correspond to the bio given to Downshift written by Bob Budiansky, which was unearthed some years ago (apparently before I'd posted those entries, although I didn't know it at the time), and which was posted on my own blog alongside all of Budiansky's bios for the Omnibots back in 2012. I have to say that I'm not terribly pleased with my mock-up work done all those years ago, and would almost certainly do things differently today. Imperfections in the fonts (ugh! All those jagged edges!), for example, really bother me. Perhaps someday I'll get around to making new versions with the Budiansky language that better matches the style of the original Tech Specs. (As with all pictures on this blog, clicking the picture will give you a larger version.)