When I was visiting family for Thanksgiving a couple of weeks back, my parents brought me a few Transformers and parts that my brother thought I should have. This is how I was able to show Mirage with his rifle last week, but it also enables me to feature a more obscure character from the earliest part of Transformers history. 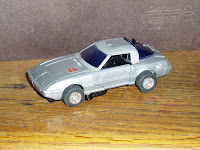 Camshaft is a member of the "Omnibots," the group which also features Overdrive, and like Overdrive, Camshaft was a pre-Transformers-era "Diaclone" toy that was brought over to the Transformers line as one of the very first mail-order exclusives. Camshaft's vehicle mode is a Mazda Savannah RX-7. Ironically, the RX-7 (having a rotary engine) doesn't actually have a camshaft, perhaps demonstrating the dangers of naming so many characters after automotive terms. They were bound to get something wrong sooner or later! 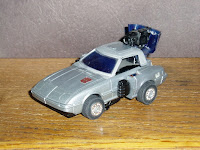 But more seriously, as a member of the Omnibots, Camshaft also has as an "armored car mode," a feature which sets these small cars apart from most other Transformer toys of the era. The official transformation is pictured here, but because of the absurdly-visible fists, I tend to just flip the missile launcher up and call it "done," if I play with this mode at all. 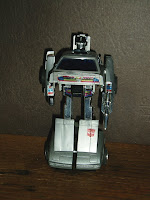 Oddly enough, I've had Camshaft's hand weapon floating around my collection for quite some time, even though the toy itself was with my brother until a couple of weeks ago. I'm not sure how that happened, but all the bits we have are properly together again. That "bits we have" part is important. Having gotten Camshaft at a flea market way back when, I'm pretty sure we've never had missiles. Maybe someday I'll have to do something about that.