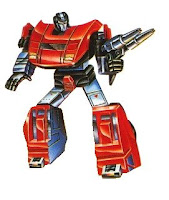 Moving along in the part of my collection I've actually had for 20 years, we come to Overdrive, a member of an obscure subgroup of Autobots known as the Omnibots. The Omnibots were among the first mail-order exclusives. I mentioned them briefly when I discussed Reflector a little over a year ago (Reflector, incidentally, is one the larger sub-set of my collection that, while being G1, I picked up sometime later). I never did pick up the other two members of this team (though I think my brother may have Camshaft somewhere, found at a flea market when we were adults), but I do have Overdrive.

Back in the days of G1, each Transformers toy came with what were called "Robot Points" on the back of the package. Kids could clip these, and send them in to Hasbro with a set amount of cash to buy Transformers that weren't available in stores. It wasn't until I was much older that I began to learn some of the story behind this marketing scheme.

The Omnibots hail from the same "Diaclone" line that many of the original Transformers came from, but for whatever reason, Hasbro was unwilling to commit these toys to the main retail line (perhaps because the Omnibots were slightly smaller than the "standard" Autobot vehicles, but far too large to count as Minicars, and Hasbro didn't feel that they could sell such an in-between size alongside the regular offerings). Mail-order exclusives were by no means uncommon back then, although they've largely been supplanted by internet sales now.

While the Omnibots weren't true "Triple Changers," they did have a third mode, which was basically the car mode with added weapons. You can see Overdrive's third mode here. Don't look too closely, though, or you'll see all the places where my child-self put glow-in-the-dark paint on several parts (I thought it was so cool back then!). 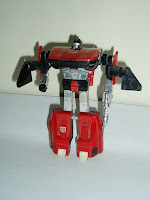 In the US, the Omnibots didn't come with bios or Tech Specs. The instructions that came with these toys explained this by saying that, since the Omnibots were "in the early stages of evolution... Tech Specs rating tests have not been completed for [them]." However, the Omnibots had also been available as mail-order exclusives in Japan, where they were given bios and Tech Specs. In fact, the Japanese Tech Specs indicated that Overdrive was the Omnibot commander. Some time ago, I had a web page devoted to custom Tech Specs. Here is the one I created for Overdrive, using a fan-translation of the Japanese original as my basis, but created to the specifications of US Tech Specs of the era.