Today happens to be my birthday. I can be a hard person to buy presents for (not that I expect many at my age). People know that I love Transformers, for example, but fear buying me any Transformers toys out of a (very reasonable!) fear that I will already have gotten that toy for myself. On at least a couple of occasions (including birthdays and Christmas), my brother has managed to circumvent this problem by getting me a third-party toy. He knows that, while I really don't object to third-party toys as some fans do, I tend not to follow them all that closely, increasing the odds that a purchase will not be one that I've already made for myself. Stax was one such gift. 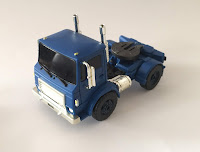 Stax is an homage to Pipes, one of the third-year Minicars that Hasbro created by remolding Minicars from original wave of Transformers toys. The original Pipes was unique among these Minicars, in that it not only was a remold of a previous toy (Huffer), but it actually changed how that mold was transformed to come up with a unique robot. In the same way, Stax uses the same base mold as Krank, the X-Transbots not-Huffer toy, but altered the transformation to achieve a different look.

I'm especially pleased to see that Stax faithfully updates Pipes' look in robot mode. While Hasbro has done a couple of Pipes updates in recent years, I've found them to be extremely unsatisfying. The most recent one, released just three years ago, not only had no mold changes from the Huffer toy that preceded it, but that Huffer toy was actually an Optimus Prime remold that (despite the color change) still looked more like an Optimus Prime toy than a Huffer toy, causing Pipes to look even less like an updated Pipes, and more like a blue Optimus (and it's even too light a shade of blue for Pipes!). I left that toy on the pegs at the store! 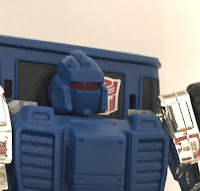 Besides having a satisfying, but not overly complex, transformation, Stax includes a couple of features that are worth mentioning. Most important (IMHO) is a switch in back of the toy's head enabling the user to display Stax with two distinct eyes (my favored variant) or with a more G1 toy-accurate visor. The weapons formed out of Pipes' vehicle-mode smokestacks may either be combined with one of the hand weapons, as in the picture above, or mounted to Pipes' arms, as seen here. I should also point out, for the sake of accuracy, that the G1 Autobot symbol seen behind Stax's head does not come with the toy as sold by X-Transbots. Rather, it was a spare sticker I got from Captured Prey that was the appropriate size to duplicate a similar faction symbol on the original toy, thus completing the homage.

I'm not sure how easy Stax is to find these days, but it's definitely a toy I recommend picking up if you get a chance. This is the updated Pipes I wish we'd gotten from one of the official sources!
Posted by Mark Baker-Wright at 9:00 AM