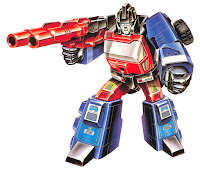 By the year 1987, Hasbro* found themselves faced with a problem. Transformers was now a hugely successful toyline, which Hasbro was very keen to continue, but they had exhausted the supply of pre-existing molds and designs they inherited from Takara (via pre-Transformers toylines) and other toy companies. If the Transformers were to continue, Hasbro needed to create all-new designs. To be fair to Hasbro, these concerns did not start in 1987. Hasbro had increasingly been transitioning from pre-existing concepts to new ones over the previous couple of years. Indeed, most (but not quite all) of the new characters from the 1986 animated Transformers: The Movie featured all-new designs. 1987 was simply the first year when all new Transformers featured designs created specifically for the Transformers line. 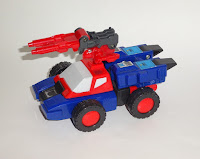 One concern that came with all-new designs involved the costs of intellectual labor to create them.  Previously, this had largely been bypassed by simply buying the rights to use pre-existing designs (if not pre-existing molds). Paying to create new designs from scratch threatened to be much more expensive. Costs of materials were also increasing due to inflation, and so Hasbro needed to make some choices to keep the costs of materials and labor down, while still creating toys that would appeal to children much as the previous three years' worth of toys had done.

Thus it was that in 1987, Hasbro introduced several new gimmicks to add play value to toys, while at the same time designing toys with somewhat simpler transformations than had been seen previously. Most prominent among these gimmicks were Headmasters and Targetmasters. Hasbro hoped that, by introducing smaller robots that could interact with the larger figures, sufficient play value would be retained to compensate for these simpler designs. While some fans argue that this focus on gimmicks was "the beginning of the end" for the original Transformers line, the Headmaster and Targetmaster gimmicks remain popular among fans to this day, as demonstrated by the success of the recent Titans Return line (and its Takara-exclusive equivalent, which specifically re-included the Targetmasters that Hasbro's Titans Return left out). I'm afraid that I don't have a lot to say specifically about Crosshairs beyond his role as a representative of the first wave of Targetmaster toys. While Crosshairs (and his Targetmaster partner, Pinpointer) featured in both the Marvel comic book and the "Rebirth" miniseries that closed out the original Transformers cartoon, he was never given very much in the way of characterization that would make him stand out from his fellow Targetmasters. I certainly like the toy's attractive red-and-blue color scheme, and his transformation is simple, yet satisfying. I just wish that the classic fiction had taken more opportunities to use him.
*I am aware that Takara, which by this time was also producing Transformers, also faced this problem, but it's easier just to refer to the one toy company.
Posted by Mark Baker-Wright at 9:00 AM