The Armada line's focus on Mini-Cons was, by some measures, a step backward for the Transformers franchise. Larger figures that had been getting increasingly complicated had to be made simpler to accommodate the special features and gimmicks the Mini-Cons would unlock. This was by no means a bad thing, as it returned a "fun factor" to the toys, making them more accessible to children (the target audience, after all!), and as a result, Armada was considered very successful.

While Mini-Cons were, in some measure, similar to the Micromasters of the tail end of "Generation One," Hasbro and Takara had clearly advanced in the intervening decade or so. Whereas nearly all Micromasters had the exact same "flip the front up to reveal the head, flip the back down to make legs" transformation, Mini-Cons demonstrated a wide variety of designs and transformations. The three members of the Race Mini-Con Team demonstrate some of this diversity quite well. From left to right, these are Dirt Boss, Downshift, and Mirage (incidentally, there was a period of time when it seemed that every F1-type racer, no matter how different from the others, would be named "Mirage," if only to ensure that the trademark was secure. Indeed, some non-F1-types even got the name!)

By G1 Micromaster standards, all three of these little robots have pretty unconventional transformations. Some of this "unconventionality" is demonstrated in the fact that Dirt Boss's arms are little stubs, while Downshift's arms are in gorilla portions (and it's debatable whether or not Mirage even has actual hands!), but it ultimately means that each Mini-Con has a distinctive design (well, at least compared to their predecessors... Armada Swindle, which came out at about the same time, is so like Mirage that fans can be forgiven for thinking that one is a recolor or remold of the other... they're not. They just utilize similar engineering). 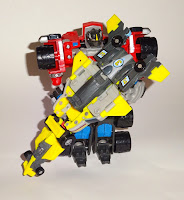 Like the Air Defense Mini-Con Team, the three members of the Race Mini-Con Team combine to form a tool that larger Transformers can use. In this case, that tool is the "Skyboom" shield. Why a shield should be called "Skyboom" is unknown, but the fact that this particular shield bears a resemblance to some kind of air- or spacecraft is hard to miss (I mean, those sure look like wings!). The Skyboom shield is said to be the only object that can block a blow from the Star Saber (the Air Defense Mini-Con Team's combined form) or a shot from the "Requiem Blaster" (a combined form of the Space Mini-Con Team, which I don't plan to cover for now). This works far better in the fiction than in reality, as the component parts of the Race Mini-Con Team break apart from shield formation with minimal effort. I'm sure that many children discovered this to their dismay during play. Seriously, kids, just put the toy on display and leave it there. You'll only have to pick up the fallen components after the odd earthquake, instead of every few minutes. ;)
Posted by Mark Baker-Wright at 9:00 AM