Throughout most of the past decade or so, most Generation One reissues have originated in Japan.  Although it was the American Hasbro that originated the idea of taking convertible robot toys and creating a storyline and personalities for them (thus, creating the Transformers concept), Hasbro is, first and foremost, a toy company geared towards meeting the needs of the children's toy market, and children just don't care as much about toys from 20 years ago as adults do.

The Japanese market is very different.  Collectibles made for an older audience are fairly commonplace, and there is clearly an audience of people who remember the original Transformers toys that, for whatever reason, would still like to buy those toys even today.  So the Japanese company responsible for Transformers toys (currently TakaraTomy in Japan, although this company is known merely as "Tomy" in the rest of the world) has been willing to put money and resources into locating old molds and/or restoring them so that old toys can be reissued for modern collectors.  If Hasbro does do a reissue, it tends to be only because Tomy (or Takara before them) has done so first. 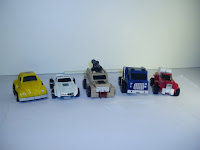 The Encore series is only the latest of several lines of Generation One reissues.  Some popular toys, such as Optimus Prime and Megatron, which had been reissued as recently as a few years previously (for the Transformers Collection line that I usually just refer to as "reissues" for entries such as the one I did for Skids last year) were reissued yet again for the Encore line, while other toys were reissued for the first time.  In the case of this Minibots set, released in 2008, it is the first reissue for most of these toys, but not quite all of them.  From left-to-right, these are Bumblebee, Tailgate, Outback, Pipes, and Swerve. 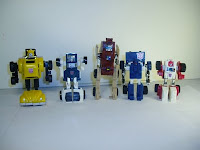 Other than Bumblebee (the only toy in this set to have been previously reissued, about which more later), all of the toys in this set were originally created in 1986, and were remolds of Minicars released with the very first Transformers in 1984.  Tomy made a few significant changes to these toys from their 1986 versions, making them readily identifiable as reissues.  Most significant among these changes are the painted faces, giving these characters distinct features (especially eyes) that they did not have in the '80s.  A couple of faction symbols have had their old stickers traded out for tampographs, as well.  All in all, these changes are a vast improvement, although I do find myself wishing that they could have removed the stickers altogether.  Note how Swerve's sticker just above his faction symbol is just a bit crooked.  Oh, well.  Can't have everything, I guess.... 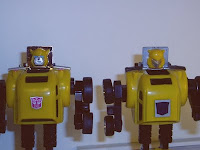 Bumblebee is the only figure from this set to have been reissued prior to this set's release.  In fact, this toy has been reissued a couple of times in the past decade alone.  The first reissue was a keychain produced by Fun4All in 2001, which was more or less identical to the original, with the exception of remolding to accommodate the metal chain and slightly different tires.  In 2004, for Transformers Collection, a much more significant change was introduced to the mold, giving Bumblebee a new head intended to more closely resemble the character's animation model.  This new head was retained for the 2008 Encore release.  This version can be distinguished from the 2004 version by the addition of some paint detailing, notably to bring out the vehicle mode lights and fenders.  Ironically, the package art (seen at the top of this entry) still depicts Bumblebee with the head seen on the original toy (seen here to the right).

Despite being a Japanese product, this set can be purchased fairly inexpensively today.  TFsource sells it for about $30.  That works out to about $6 per toy (before shipping, of course).  When one figures that "Legends"-sized toys (the closest comparable modern size) sell for about $5 if you can find them at a standard toy store (and $9 if you have to go to a place like Rite Aid!), this seems quite reasonable.  If these classic characters interest you at all, I certainly recommend picking them up while you can.
Posted by Mark Baker-Wright at 12:00 AM