Repaints have been an economic fact of life for most Transformers lines, and the Masterpiece line is no exception. For some molds, such as the one shared by Prowl and Bluestreak, the repaint options are immediately obvious.* But, for molds created to depict a character that had no mold reuse within the original Transformers line, the Masterpiece creators have had to look elsewhere for inspiration if they want to recoup the costs of creating the mold. Arguably the most frequent source of such inspiration has been the Diaclone line which created the molds for the original Transformers toys in the first place. Thus, it was fairly intuitive that the Masterpiece Wheeljack mold (released in 2014) could be used to represent the "Marlboor" variant, widely known in collector circles as an obscure pre-Transformers use of the Lancia Stratos mold.

If only things could be so easy....

What needs to be understood, up front, is that the original Diaclone toy wasn't just patterned after an actual type of real-life car. It was patterned after a specific vehicle that raced on the European circuit (in fact, so was the Wheeljack toy). That vehicle was sponsored by Marlboro cigarettes, and thus had a Marlboro packaging-inspired paint job, complete with the sponsor's name. International trademark laws weren't the same in the 1980s as today, and the makers of the Diaclone toy simply changed that name "Marlboro" to "Marlboor" (among other minor changes) and called it "good." 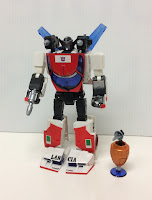 International trademark laws weren't the only thing that have changed in the past 30 years, however. Especially (but not exclusively) in the United States, public sentiment about smoking has shifted over the decades. Anger that tobacco companies actively marketed their products to children led to stronger laws intended to prevent the practice, including a 1998 law that included language preventing cigarette companies from "directly or indirectly" (emphasis mine) doing anything that might increase the chances of children picking up cigarette smoking as a habit. To avoid a lawsuit, cigarette companies now had to actively enforce their trademarks so as not to be seen as complicit in marketing to children, even if they weren't the ones actively using their advertising marks on the product. Thus, the company that owns the Marlboro trademark sought to prevent the release of the Masterpiece toy altogether. Only after several changes, not only removing any "Marlboro-ish" names from the toy completely, but also changing the distinctive red-and-white triangular pattern associated with Marlboro that was to be displayed on the hood (and elsewhere) to patterns less obviously connected to the cigarette brand, did the toy, now named "Exhaust," finally come to be released. Indeed, it was an open question for some time whether, even if the toy was made, it could be imported to American buyers, even with these changes! As the existence of the toy in my collection indicates, importers finally found a way, although at least one outlet did so by further altering the toy's deco (to the frustration and anger of many fans, who were not notified in advance that this would be done).

Exhaust does come with a few accessories that Wheeljack did not have. These include a second shoulder-mounted missile launcher (versions of the original Lancia mold, including the original 1984 Wheeljack, came with two, but as Wheeljack was generally depicted in the cartoon with only one, the Masterpiece version of Wheeljack only had one) and parts to assemble "the Immobilizer," a MacGuffin created by Wheeljack for a single episode of the cartoon. The folks behind the Masterpiece line love homaging obscure cartoon bits in this way, although this one is more properly associated with Exhaust's mold-predeccesor than with Exhaust himself. Still, given the difficulty in bringing this toy to existence in the first place, it would be churlish to complain about such a nifty little extra. Just keep it with Wheeljack if it bothers you.

*Admitting, of course, that the more obvious color scheme for a Masterpiece Bluestreak was the traditional grey color scheme, which was indeed released before the Diaclone blue variant I actually featured.
Posted by Mark Baker-Wright at 9:00 AM