One of the most persistent myths of the Transformers franchise was the existence of a "blue Bluestreak" among the original Transformers toys in 1984. Between a combination of Bluestreak's color-suggestive name, his box art, and the promotional images of the toy in Bluestreak's original instruction book and the catalog that came with that first run of toys (both of which used a Diaclone toy instead of the version eventually used for Transformers production), many fans were convinced that the original Bluestreak toy was indeed blue rather than the silver and red color scheme that was actually used (which, it should be noted, had no precise Diaclone equivalent, the closest Diaclone example having a black hood and top that the original Transformers version lacks). I myself remember seeing the silver-and-red toy in the '80s and thinking that the blue version used with all those packaging materials must have reflected some earlier variation that I had simply missed in the earliest days of the franchise. But, to this day, no legitimate sample of the toy in blue has ever surfaced in Transformers packaging. 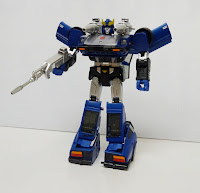 Fast forward some thirty years later, when the folks at TakaraTomy finally decided to pay homage to this historical oddity in their Masterpiece line. As might be expected, the toy is pretty much just a straight redeco of Masterpiece Prowl without the lightbar, but one thing that may surprise fans is that the "standard" silver-and-red version of Masterpiece Bluestreak (called simply "Streak" in Japan) actually sports slightly remolded head and waist parts that differentiate "Streak" from Prowl. Yet this toy does use Prowl's head and waist. One presumes that this is to further heighten the homage to the 1980s Diaclone original, which didn't have such differentiations between toys sharing the Fairlady-Z mold.

Another quirk that is easily overlooked by English-speaking Transformers fans looking at this Masterpiece figure is the fact that, when calling this figure Bluestreak (emphasis mine), and not just "Streak," TakaraTomy is specifically setting Bluestreak apart as a distinct character, and not the same entity as "Streak" in different colors, making this arguably the first toy Bluestreak's ever gotten... at least in Japan.

All of this color-switching discussion may lead some of you to ask, "So, why did the original toy get released in silver-and-red, anyway?" To this day, I do not know the answer to that question. I certainly consider this color scheme to be far more attractive, and am glad than an official Transformer Bluestreak using it finally exists.
Posted by Mark Baker-Wright at 9:00 AM