As I've pointed out in the past, I'm a huge fan of game shows. Easily my favorite genre of television. I was extremely pleased to learn last year, while I was between jobs, that BUZZR, a new free over-the-air broadcast station (i.e., not cable or satellite, which I would have to pay for) dedicated to classic game shows, was beginning to air in my area. BUZZR just celebrated its first anniversary earlier this month, but I'm more interested in another anniversary, which I also learned about through BUZZR: Friday, July 1st, marks the 75th anniversary of the television game show!

Now, truth be told, using July 1st, 1941, as the anniversary comes with a caveat. Wikipedia says that Spelling Bee is actually the earliest television game show, having been broadcast in the UK in 1938. Presumably, BUZZR is going with the standard of commercial television (or possibly even just television based within the United States), which also celebrates its 75th anniversary that day. That historic first day of commercial television featured two game shows, Uncle Jim's Question Bee and Truth or Consequences, which both aired special episodes on WNBT (what is now called WNBC in New York City). I know absolutely nothing about Uncle Jim's Question Bee beyond a very brief entry on Wikipedia. While Truth or Consequences  would return for a successful television run in 1950, Uncle Jim's Question Bee was apparently exclusive to radio beyond that single television broadcast. Indeed, both shows had already been on the radio for some time prior to 1941, and it is certainly true that television and radio shared quite a few shows (and often the very same episodes) during many of television's early years.

The early era of television game shows is most often remembered today for the quiz show scandals of the '50s, whereby some contestants were actually given the answers to questions they were to be asked on future episodes, yet coached to act as though they struggled through their responses. While I certainly applaud the efforts to eliminate such contest-rigging from the genre, it does not get mentioned enough that no actual laws were broken on these shows. This, of course, is simply because no relevant laws yet existed until 1960. This is not to absolve the people guilty of perpetrating these falsehoods in the 1950s, some of whom did violate perjury laws attempting to cover up their actions later, so much as to highlight that they did what they thought was necessary to build drama in much the same way as is routinely done for scripted programming. Much the same thing is done, even today, in the ways that many shows (including, but hardly limited to, the so-called "reality" sub-group of games) use careful editing to bring out whatever aspects a producer wants the audience to see. Nevertheless, people were being misled, and rules have since been put in place to ensure that, whatever else a producer might do to create "drama" for a program, the game itself remains fair.

While many of the shows of this early era are largely forgotten today, several enjoyed extremely long runs. The original What's My Line, for example, ran on CBS straight through from 1950 to 1967 (17 years), and almost immediately moved to syndication for another 8 years, resulting in a solid 25 years before disappearing. To Tell the Truth has fared even better. Premiering in 1956, it celebrates its 26th year on the air (spread out over a half-dozen distinct versions) with a summer run which started this past month. 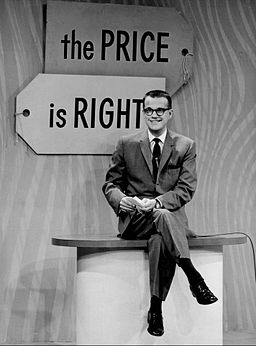 All of this pales, of course, when compared to the staying power of The Price is Right. While most people today remember the version that started in 1972 with Bob Barker, it enjoyed a nearly nine-year run starting in 1956 with game show legend Bill Cullen at the helm. Adding Cullen's run to the long-standing CBS version nets Price a whopping 53 years! And that's just in the United States! For more than two-thirds of the time that commercial television has existed, some current US version of Price has been on the air. It's all-but impossible to imagine television without it!
Posted by Mark Baker-Wright at 9:00 AM