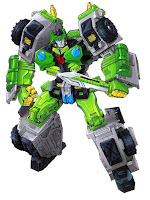 BotCon 2007 was a turning point in the early history of Fun Publications' tenure with the convention. It not only featured the first box set to completely sell out even before the convention started, but BotCon 2007 was arguably the first time that the convention-exclusive toys were an intentional extension of the line of toys then-currently (or, at least, very recently) sold at retail. Especially because of the controversial inclusion of the Seeker jets, BotCon 2007 exclusives were touted as a way to "complete" one's Classics collection (as the revisited Generation One characters that came out in 2006 were more-or-less officially called, if not on the actual packaging of the time). 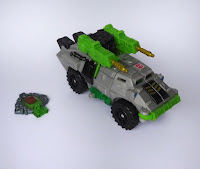 Some of the exclusives that year, such as Thundercracker (obviously, as one of the aforementioned Seekers) and Alpha Trion, were fairly intuitive (if not obvious) concepts given the molds available. Others, like Springer here, are a bit more of a head-scratcher. The original Springer was a triple-changer whose alternate modes were a helicopter and a futuristic car. While I assume that the armored car seen here is intended to be an analog to the car mode of the original... I have trouble seeing it. The yellow of the original toy is all-but absent, and the primary green colors of the original have given way to the grey that used to be little more than an accent color. The helicopter mode is completely lost. 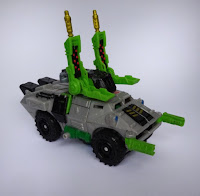 Of course, as with all BotCon exclusives, Springer does use an already existing mold as its base. In this case, the 2005 "Cybertron Defense" Hot Shot mold (from the Cybertron line) was used. Springer therefore retains the "Cyber Key" gimmick inherent to Cybertron-line toys, in this case revealing additional missile launchers when the Cyber Key is inserted into the back of the turret (there are other hidden weapons in various places in both of Springer's modes which do not require the Cyber Key to activate, including the fender weapons seen here). There's no mistaking that Springer is a tough guy, which is certainly in keeping with the character's previously-established personality. 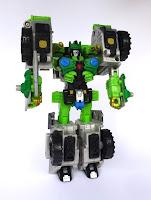 Having said that, it should be noted that Fun Publications' Classics fiction was set in the United States-specific part of the Marvel Comics continuity, in which Springer had never previously been seen. Springer was well-known from the cartoon, and appeared in the UK comics, but neither of these were a part of Classics continuity, making the BotCon 2007 comic story "Games of Deception" the first (and only significant) appearance that Classics Springer ever made. Given how little Classics Springer resembles his original counterpart, who would have noticed if his personality was different, too?

I don't entirely recall when I picked up this toy. I passed on it entirely when I was looking to pick up BotCon 2007 toys immediately after the convention, but I must have decided it wasn't so bad some time later. Indeed, it's a decent mold in its own right, including nice little extras like the aforementioned hidden weapons and the ability to stow the Cyber Key in this slot on the side (which is also used to stow the robot mode's dagger away if you don't want to have it held in-hand). I just don't find that it evokes Springer especially well, and am confused to this day as to why Springer's character was chosen to feature in a continuity in which he hadn't appeared previously. I'm sure there's some behind-the-scenes reason related to available molds and decisions made by those who were involved, but it's always struck me as odd. That said, it's hardly the strangest choice made related to the story that year.
Posted by Mark Baker-Wright at 9:00 AM