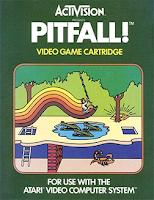 While the Atari 2600 version of Pac-Man was the highest selling game in that system's history, Pitfall!, the holder of the #2 position, has a perhaps more interesting and unique story. To tell it properly, however, it isn't enough to go back 30 years to the game's introduction in 1982. I need to go back a few years more....

The standard for all home video game systems of the early video gaming era was that each company would make all of the games for its own system. Thus, the first batch of Atari 2600 games were all made by Atari. But by 1979, a group of Atari's best programmers, perhaps most notably David Crane, get fed up with Atari's policies which failed to reward programmers for successful games. They left Atari to form their own company: Activision, the first third-party manufacturer of games for any home video game console. Unlike Atari, Activision would advertise the programmers who created the games as well as the games themselves, and programmers would be entitled to royalties on game sales. Thus, if a game did well, the people who created them would benefit.

Another of Crane's disagreements with Atari's game-making policy was their trend — easily demonstrated via the Pac-Man game already mentioned — of creating games that were home versions of games created for other forums (specifically, the self-contained video arcade unit). Crane argued that this resulted in games for the 2600 that were sub-standard copies, and that it would be better to create games that specifically took advantage of the strengths and weaknesses of the technology available for the system the game was being created for. Pitfall!, almost certainly Crane's best-known creation,* is an excellent example of the result.

The concept of the game is simple enough. The player controls "Pitfall Harry" as he runs through an ever-changing jungle, avoiding obstacles that will either slow him down (and steal from Harry's score) or take one of his three lives, in an effort to reach as many of up to 32 treasures before a 20-minute time limit (or Harry's supply of lives) runs out.

While Pac-Man was limited to a single game screen and flicker-strobed sprites to attempt to give the game the required number of characters, Pitfall! achieved a wide variety of game situations and characters, all in solid, non-flickering sprites, simply by using an interchangeable series of elements. On one screen, you might have a lake and a vine you could use to swing over it. On another, you might have a lake and a group of crocodiles that you can jump on only when their mouths are closed. On yet another, the lake might open and close so you can run across if you time it just right (There are plenty of boards without lakes, of course!). This enabled the programmers to create a game with 256 screens, all basically similar to each other, but each with a unique arrangement of the available sprites.

By modern standards, the game's pretty monotonous (as the series of such similar screenshots can't help but demonstrate), but Pitfall! was undeniably a significant technological achievement for its time, and the game was popular enough not only to earn that #2 all-time spot, but to spawn several sequels over the past three decades (including one for the iPhone and similar devices, which came out just last month). Pitfall! even inspired a short-lived Saturday morning cartoon as part of the Saturday Supercade series that gave Mario his first animated appearance anywhere. And it all happened because a group of programmers decided to take the risk of leaving the company that gave them their start so they could strike it out on their own.
*I am not counting, of course, games that Crane worked on that involved concepts created by others. However, even most of those aren't especially well-known today. Especially worth mentioning on this blog, however, is an obscure game created for the Commodore 64 computer: Transformers: The Battle to Save the Earth.
Posted by Mark Baker-Wright at 9:00 AM