By default, most Transformers toys can safely be considered as falling into one of two groups: 1) those that are available in America through Hasbro, 2) those that (not also being available in America) are available in Japan through Takara (now TakaraTomy). There are, of course, Transformers that fall outside of these two groups. Some, such as the South American Mini Vehicles (here are some examples, alongside similar oddities) are the stuff of legend, and I'm not likely to ever have one in my collection. Others, such as the original Action Master Thundercracker, were available only in Europe and Australia. But such exceptions notwithstanding, most Transformers could be purchased through one of the two main countries. 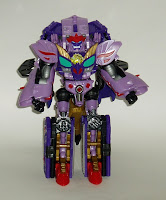 That's not to say that you couldn't get Transformers from other countries, of course. In the case of toys like Action Master Thundercracker, the toys were even sold by Hasbro (via one of Hasbro's international branches). Takara, on the other hand, tended (before their merger with Tomy in 2006) to utilize other companies to distribute their toys to market outside of Japan. Thus, Beast Wars II Galvatron was distributed to South Korea via a company called Sonokong, and this is the version I currently have (I actually first bought BW2 Galvatron years ago, back when Hasbro had a "Hasbro Collectors" website that made Takara-exclusive toys available to North American customers. That site shut down several years before the current "Hasbro Toy Shop" went online, and somewhere along the line I sold my BW2 Galvatron for reasons I no longer remember). 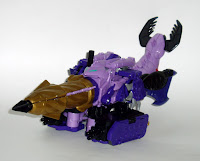 Although this Galvatron was packaged and purchased through Sonokong, it is for all intents and purposes a Takara toy. The same colors, the same quality plastic, etc. It was simply a later production run of the same toy, shipped to a different audience by a third-party company that had made an agreement with Takara to do so. (I have read a few reports that Sonokong's quality control may not have been as high as Takara, but I've honestly seen no hard evidence to suggest that even this is truly the case.) This is in marked contrast to the South American toys mentioned earlier, which are quite distinctive and easily recognizable. 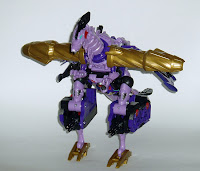 I mentioned back when I wrote about Beast Wars II Dirge in 2008 that most Beast Wars II toys were redecos. There were only three completely new molds created for that line, and Galvatron is one of them (the only such Predacon, in fact). Like Magmatron (who came later, in Beast Wars Neo), Galvatron is described as the "Emperor of Destruction," and no doubt the folks at Takara thought that that the "big bad guy" deserved such special attention that only a new mold could bestow upon it, and it's clear that some effort was indeed put into making this a worthy toy for a fearsome leader. The gold-and-purple colors seem to be a clear homage to the original Galvatron, and the fact that he's a triple-changer implies power beyond what a normal Transformer would possess. But I've gotta say, the dragon mode (admittedly, dragons are also strongly associated with being extremely powerful) looks a little too much like an awkward chicken to be especially terror-inducing, at least to me.

Not too many people are aware of Sonokong, even among Transformers fans. People often mistake these toys (and their admittedly sometimes lower-quality packaging, which belie the fact that the toys inside are essentially the same as those purchased directly from Takara) for knock-offs. Adding to this misconception is the fact that they can often be found quite inexpensively in places where one might expect to find knock-offs. I certainly recommend being informed before making any purchase, but if you're aware that these toys are out there, you can actually snag a pretty good deal on some otherwise hard-to-get toys. Good luck!
Posted by Mark Baker-Wright at 9:00 AM