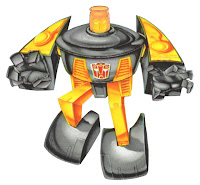 Quite a few years ago, I tried my hand at a number of Transformers-related customs. I've shared a few of these before, but I somehow never seem to have gotten around to sharing "Astrostar," my silvery custom made from an extra Cosmos.

Since Cosmos was a spaceship, I thought about what color a spaceship should be. If I may be so bold, I think that the silver color-scheme I decided upon is far more realistic than the green of the original toy, if "realistic" is even an appropriate word to use for a science-fiction creation such as a flying saucer!

In an attempt to keep the toy fully transformable without scraping the paint applications away, I left Cosmos' yellow parts unchanged, although close examination of the pictures does reveal that the green where the arms meet the torso still shows through. The gold (mostly) replacing the red of Astrostar's head seemed an appropriate counter-point to the silver on the rest of her body.

Yes, "her." Although I am on record as saying that, as robots, Transformers shouldn't have "male" nor "female" sexes, the fact that they do in most of the fiction is an accomplished fact of life. Having established that female Transformers exist, however, the powers-that-be have managed to incorporate a disappointingly small number of them into the actual roster of established characters. When I wrote up Tech Specs for this fan creation, I decided to do my small part toward equality (you'll have to click the thumbnail to actually read the bio, of course). 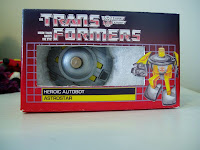 I didn't stop at the Tech Specs, either. This was one of the customs for which I created an actual box, designed to resemble the Generation One boxes (not precisely, but most average folks wouldn't know the difference).

Sadly, I no longer have this toy in my collection, having sold it on eBay to a fan some years ago. However, I remain quite proud of this particular effort. You can see some more pictures (including the box from other angles) at this link.
Posted by Mark Baker-Wright at 9:00 AM