My current living situation is such that I need to go out of my way to get quarters from time to time. As I've discussed in the past, this is not something one can do as quickly and easily these days as perhaps one once could, but there are still a couple of reliable outlets near where I live. One such outlet is a pizza place that still has a change machine near a selection of video games they have on hand. Because getting quarters is a service that I am glad they provide, I generally use at least one of the quarters I get on one of the video games, but this past weekend, I was informed that the video games were out of order. I therefore spent some quarters on something I think I've only done twice in the past decade: a capsule toy machine. In this case, I spent a dollar on one of the sticker boxes from the new "New Super Mario Bros. Wii" game. 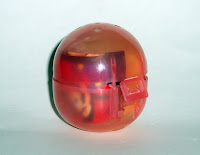 As I've mentioned in my current "30th Anniversary" video game series, Mario is the most famous video game character of all time. One of the benefits of this fact for me is that, although the stickers are being sold to promote a new game on a system that I don't own (the most recent video game system I've had in my home is the Super Nintendo, so one can safely assume that I'm a bit behind the times in this area), I had a good chance of ending up with a set that contained characters and/or icons with which I was familiar. There was still a bit of a risk. Besides the $1.00 price (which I did think was a bit high, but I obviously wasn't so put off by it that I didn't pay it), I'm not terribly familiar with the "Glow Block" I might have received, and even the "Super Guide Block" is a bit later than the Mario games I grew up with. Still, that left me a 3-out-of-5 chance of getting a block I would feel some nostalgia for, and we haven't even gotten to talking about the stickers themselves! 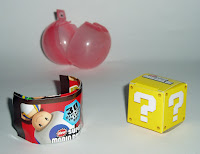 As luck with have it, the capsule opened to reveal a "Question Block," arguably the most iconic of all the block types in the Super Mario Bros. franchise. Of course, the block is nothing more than a folded up piece of printed card stock, but it's actually reasonably close to being in scale with the not-really-LEGO versions of Mario and Yoshi I own, so it should fit in with them just fine. It also came with the advertisement that I scanned for the top of this entry, just in case I was interested in trying for the other sticker sets, no doubt. 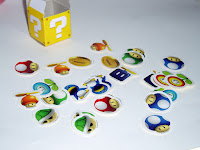 But, of course, the stickers are the main attraction here. Kids love stickers! I'm a little beyond this kind of thing, myself (however much I obviously have retained many of my childhood interests. I can't very well write a blog like this one and not admit that), but I'm sure I'll find some ways to use these or some kids to give them to. This particular set focuses on useful items from the game, rather than characters (which are found in other sets). While the mushrooms with propellers on top are admittedly new to me, the regular mushrooms and turtle shell stickers could just as easily have been made for a Super Mario game of my own era. Heck, for all I know, perhaps they were. It's not as if these designs aren't used and reused ad nauseum in promotional campaigns.

But, at the end of the day, I got the quarters I needed to do my laundry, supported the business that enabled me to get them, and got a nice little piece of nostalgia in the bargain. Not bad at all....
Posted by Mark Baker-Wright at 9:00 AM