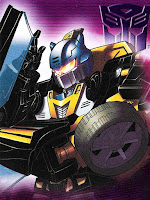 At BotCon 2008, the "Shattered Glass" universe was introduced. Although there is still a bit of a divide within the fandom as to the merits of the alternate universe concept, I think it's fair to say by now that the franchise has given Fun Publications a venue for creating stories and toys that are unique to their properties (that is, the official Transformers club and the BotCon convention), and that sell quite well. In fact, the toys from the 2008 convention set go for such high prices these days (and I've needed the money badly enough) that I have to confess that I have already sold all of my 2008 official Shattered Glass toys except for Goldbug.

Goldbug, as you may recall, was the name given to the upgraded form of the Autobot Bumblebee back in 1987. After Hasbro decided to go back to the name Bumblebee just a couple of years later, the character has consistently been "Bumblebee" ever since, and the name "Goldbug" was never used by Hasbro again (even an honest effort to homage Goldbug this past year was simply called "Gold Bumblebee"). This left the name available to Fun Publications to do an homage that would likely never have been attempted otherwise. 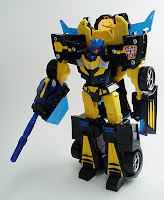 BotCon Goldbug uses the mold of the Cybertron Hot Shot figure, with a new head that captures the essence of original Throttlebot Goldbug head quite well (if admittedly adding red to the eyes to capture the sense that this Goldbug is evil). Since the Hot Shot toy doesn't even remotely resemble a Volkswagen Beetle (commonly called a "bug"), the folks who worked on the deco played with the colors a bit to give the figure's chest design a somewhat insectoid feel. I'm not sure how that works in the fiction (the writers handwave the Earthen modes on a Cybertron where no one had, at that point, ever been to the Earth as preparation for an upcoming Earth invasion, but how familiar can they be with insects?), but the head really captures the idea that this is a new Goldbug just fine. I'm not sure I would argue that "the head is enough" on all—or even most—figures, but it seems to do the job here. Thus, this is the one Shattered Glass figure from the 2008 convention that I've held on to.
Posted by Mark Baker-Wright at 10:30 AM