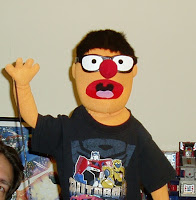 Lest I give anyone the wrong impression, I should hasten to say that my wife is NOT expecting.

Oddly enough, I'm not talking about shopping for any of my young nieces and nephews, either (although my youngest nephew, at a few months old, might nonetheless have been benefited from this adventure when I get to meet him in a few days, had it not worked out as I hoped). Rather, I was shopping for a Muppet.

For a few years now, the FAO Schwarz website has had a "Muppet Whatnot Workshop" whereby one could design their own Muppet on the website, order it, and have your custom-made Muppet delivered to your home. I've been intrigued by this offering for quite some time, but I've been reluctant to spend the cash that FAO was asking (the price has gone down a bit since these were first offered, but it's still nearly a hundred bucks). Then I found out that Toys R Us (who bought out FAO Schwarz in 2009, mere months after the Workshop website first started up) was selling kits at the store for a somewhat lower price. With Christmas around the corner, this promptly went on my "Want List," and my brother was kind enough to send me one. I thus had my own Muppet!

The kits differ from the online product in a few notable details (besides the price). One advantage that the kits have over their online counterpart is that you are given an assortment of eyes, hair, and noses that you can mix-and-match to your heart's content, rather than having to choose just one of each to be permanently affixed to your creation. However, one element the kits lack is clothing for the new Muppet. Instead, you can buy from an assortment of Whatnot clothing for about $20. Actually, if one added the value of clothing to the base price, you've almost caught up with what you pay for the online version, which includes clothes.

Of course, I didn't want my Muppet to go around naked! I'd already had a couple of shirts too small for me to wear from Hasbro's recent Transformers giveaway, but neither the "Adult Small" nor the "Child's Large" were anything near small enough to fit the Muppet properly.  Even so, I felt confident that I could get some baby clothes from Goodwill that would work, and at a fraction of the "official" price. There was still an element of risk: despite doing some research online, I could not find any firm suggestion of what the right size would be. I suppose it makes sense that the Whatnot folks aren't just going to come out and tell you how to avoid purchasing their product. So, there was a chance that, even after having made an educated guess based on my previous attempts, I might still end up with something that wouldn't work. 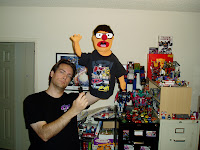 After checking out a few stores in the area, I finally got the shirt you see here for $1.99 (Goodwill doesn't even charge tax!). For those who are wondering, it is a size "3T." I might have been able to get away with a size smaller, but basically I think it fits pretty well. And I was able to get a Transformers-related shirt, to boot! All for a tenth of the price!

Thus, I have a new mascot for the blog. I haven't yet come up with a name for the character, but welcome suggestions. Feel free to recommend names in the comments.
Posted by Mark Baker-Wright at 7:45 PM