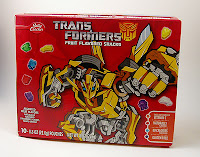 This little oddity is something I found during a recent trip to the so-called 99 Cents Only Store.  Of course, I may have to rethink my title, since this is obviously no more collectible than the Valentine's Candy was, but ah, well.... 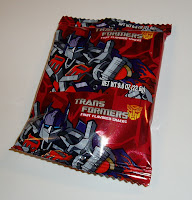 Not too much to tell, really. It's pretty standard character-shaped gummy-snack fare. It's just the first time I can recall Transformers getting into the act (I'd welcome images of anything older, of course). The snacks are apparently made by Betty Crocker, and feature a cartoonish version of Live-Action Movie Bumblebee on both the front and back of the box, while the pouches inside depict a similarly cartoony Movie Optimus Prime. 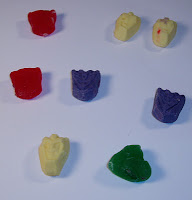 The gummies inside, oddly enough, are not apparently based on the movie designs (even the faction logos seem to be the standard Autobot and Decepticon logos, rather than the slightly-tweaked versions used in the movies), although it's admittedly hard to tell from the gummies as pictured here, as they were already fused into a single mass as I pulled them out of the pouch, and had to physically separate them. The box is a bit clearer, and one can tell that the characters are drawn from Transformers: Animated, featuring not only Prime and Bumblebee and the faction logos, but also Bulkhead, Megatron, and several vehicle forms. If you happen to find these, go ahead and pick them up. They're worth a buck, and I'm guessing they won't be around for much longer.
Posted by Mark Baker-Wright at 6:30 AM