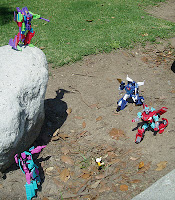 The latest contest run by the folks at the Hasbro Transformers Collectors' Club asked members to depict "ANY of the Fun Publications produced Transformers toy(s) and showcase them in some sort of battle or adventure. ACTION is the key word!" As with another recent contest, I chose to use Action Master Thundercracker. After working so hard to get this toy made, I figure I should make the most of it!

Sadly, this photo wasn't any more successful at winning the contest than any of my other recent efforts (although I did feel that one of the entries that did win used a similar concept, albeit not including Thundercracker). What follows is the text I submitted along with my entry when I sent it in.

As is often the case with contests like these, I took quite a few shots trying to get one that I thought was good enough to send. The element that put this one over the top was that this angle and setting seemed the most "in action" to me (in keeping with the fact that "ACTION" was said to be the "key word" on the front page announcing the contest). All figures in this shot, with the exception of the KRE-O human running away from the Decepticons as Rapido races to get him to safety, are not only Fun Pub figures, but are all characters from the existing "Wings" universe (assuming that we have AMTC and not his SG counterpart, and allowing for the possibility that Side Burn is still alive by the time G2 enters into things).