The Return of a Transforming Seminarian Tradition 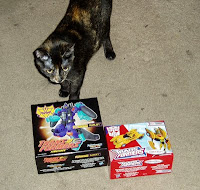 I'm getting ready for a week of traveling, and thus haven't had time to do much else with these toys yet, nor to take the pictures I'd like to take of the other Transformers I'm hoping to feature here in the near future.  I'll try to keep up with posting this week, but both the schedule and the content will reflect what I'm able to do while on the road.
Posted by Mark Baker-Wright at 9:30 AM