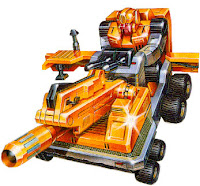 My original intention was to have this posted last week, so that it would be covered before the BotCon 2011 Transformers Hall of Fame ceremony.  Sadly, I got too busy with other things, but I can still talk about the Hall of Fame and this toy's somewhat unique place in it.

The concept of a Transformers Hall of Fame started just last year, as Hasbro and Fun Publications (the organizers of BotCon) sought to honor a few of the individuals (both real/human and fictitious/Transformer) who have made a lasting impact on the franchise.  They selected several inductees and left an open Transformer-character slot for a "fan's choice" inductee.  A call was put out through the internet for all the various Transformer-themed message boards to send in their nominees, and the top five nominees to surface through this process were then put to a vote on the Hasbro web site.  In what has become a common practice in the post-American Idol era, "vote early, and vote often" was the order of the day, and at the end of the process, the 2010 "fan's choice" inductee (Beast Wars Dinobot) was announced at the inaugural Hall of Fame ceremony. 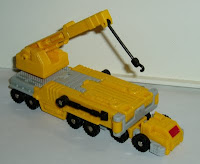 Fast-forward to this year.  While still in the nomination process, Erector surfaced as a surprise candidate.  I'd rather not get into why.  If you don't already know, just ask any junior-high aged boy about it, and watch his reaction.  A lot of fans (myself included) were bothered not only by the possibility that such a reason would be used to catapult an otherwise-practically-unknown character to "Hall of Fame" status, but by the less-than-civil reactions many of us were given when we objected. There will be those who will be quick to point out that some of the opponents of Erector's nomination were also less-than-civil.  To that, I can only respond, "two wrongs don't make a right."  The whole thing was more than a little embarrassing, and I honestly don't know when the first uncivil remarks were made, nor by which side.  Only that it quickly got ridiculous.

But those who supported Erector's nomination did have at least one very relevant point: a lot of the concepts that went into Erector's design (and, indeed, Micromasters in general, with Erector being only an example) have been refined and continue to see use to this day.  The Mini-Cons have long been understood to be an update of the Micromaster concept, and the toy line for this year's movie marks the return of transforming vehicle accessories.  Erector displays both of these traits in an early stage of development.  While I'm glad that Waspinator won the final vote (even though I voted for Grimlock), I want to give Erector at least this much respect: his nomination inspired me to pick up this toy!
Posted by Mark Baker-Wright at 12:00 AM