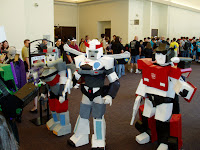 Now that BotCon 2011 is over, the message boards have been engaging in the traditional debate about how this year's convention compares to conventions of years past.  There is already an emerging consensus that in terms of the news to come out of the convention, there really hasn't been that much of interest.  For those who didn't actually attend the convention, that means that the convention as a whole appears to be one of the less successful ones.

For those of us who did attend the convention, a different impression quickly becomes evident. 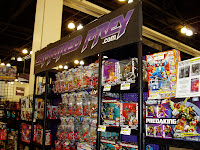 It's almost a cliche for some people to say that a convention is about the people one meets while there.  That's certainly true to some extent. I had a number of interesting conversations with people while manning lines or helping out with the Captured Prey booth.  I enjoyed helping people find some of the toys they were looking for.  It was fun to be able to talk about the pop culture icons we love with people who actually share that interest for a few days. 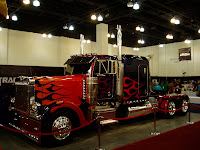 But there were other reasons to say this was one of the better BotCons, as well.  The exhibit room had an impressive array of cars from the movies (and there were other Transformer-related cars outside), while advertisers were giving away free stuff and previewing upcoming television shows and games.  The kids area was larger, and with more items to play with, than I can recall at any other BotCon.  Some of the fans wore some of the most impressive costumes I've ever seen at a BotCon.  By nearly all accounts, the voice actor panels were special this year in a way that other conventions have seldom approached, let alone matched.

The downside of so much volunteer work is that I, myself, didn't actually get to see very many of those panels, myself, but I did get to hear the first half of the script reading of the story from this year's BotCon comic: "The Stunti-Con Job."  While there were some hilarious moments from the story itself (all the comments about Sentinel Magnus' "hat," pretty much anything that Dead End said...), the highlight for me was a parody of "Anything You Can Do" as sung by Generation One Grimlock and Animated Grimlock (voiced by Gregg Berger and David Kaye, respectively).

There is no question that going to BotCon is an expensive endeavor.  I'm lucky that I didn't have to deal with the cost of travel and hotel for the trip this year, and I'm still suffering a bit of sticker-shock from the experience (and hoping that the exclusives I sell on eBay and/or via MCAX.com will help recoup those costs).  It's not at all unreasonable that the experience should be something special to those who go to the trouble and expense of attending, and if those attendees aren't satisfied, the folks at Fun Publications would do well to take that dissatisfaction seriously.  But if the attendees are on the whole pretty happy (and they do seem to be), and the complaints seem to be coming almost exclusively from people who didn't undertake the costs of coming, I have to admit that I'm less inclined to put much stock in those concerns.
Posted by Mark Baker-Wright at 12:00 AM