I don't know that anyone else feels the same, but there's a sense in which I sometimes think of BotCon 2002 as a particularly good one, despite the fact that I didn't even attend. That year saw four different exclusives, all available separately, and used the first Generation One character and Generation One mold exclusives ever specifically made for a BotCon (the exclusive for the first BotCon was G2 Breakdown, which clearly used both a G1 character and mold, but that exclusive wasn't specifically made for the convention. Someone else pointed out that there was an Arcee toy the previous year, but note that there was never an actual transforming G1 Arcee toy produced during the original toy line. Still, she is a Generation One character...). 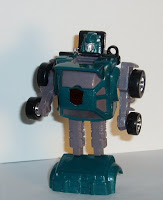 Tap-Out was one of the two exclusives (along with Glyph) for BotCon 2002 that used a Generation One mold (in Tap-Out's case, Cliffjumper's). Technically, these toys didn't use the Generation One mold, but rather the modified versions created by Fun4All to be used as keychains. Indeed, even the BotCon versions had to be created as keychains rather than technically as "toys," for licensing reasons that aren't altogether clear to me. I promptly separated the metal keychain element from the rest of the toy, and discarded it. 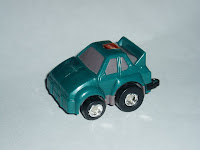 Tap-Out was actually given away for free to BotCon 2002 pre-registrants as an attendee exclusive, marking the first time that such a giveaway was done. This practice has now become commonplace, although the current organizers of BotCon, Fun Publications, are much more serious about making sure that attendee-only exclusives remain available only to attendees. Tap-Out was eventually available online via a web site.

Besides the Generation One references, one of the reasons I like this era of BotCon is admittedly rather self-serving. Because the organizers produced so many of these small keychain exclusives--far more than they actually sold or gave away at the convention--they eventually became fairly inexpensive to get on the secondary market. Over time, I've been able to pick up most of the Fun4All Transformers keychains, both exclusive (also including BotCon Europe MMII exclusive Rook) and non-exclusive (the only exceptions I'm aware of are the black-colored variants available exclusively in Japan). These are cool little toys to have around, and I'm sorry that Fun4All wasn't able to produce more of them before they went bankrupt in 2004. And, of course, the organizers of BotCon themselves followed suit at roughly the same time. So even if BotCon 2002 was good for me, it apparently wasn't so good for the folks who made it special in the first place....
Posted by Mark Baker-Wright at 12:00 AM