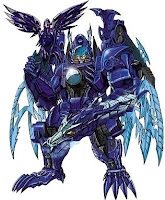 I enjoy using the Transformers Wiki as a resource, and contribute to it from time to time. One of the tasks that falls to those who work on such projects is how to categorize certain characters. More often than not, this is a fairly simple situation. If it says "Armada" on the package, then you group it with the "Armada" characters, and there usually isn't something from another line that would actively contradict that classification. 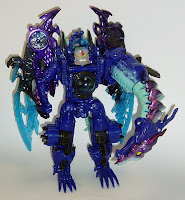 But, every once in a while, it gets difficult. Cryotek, for example, is classified on the Wiki with the Robots in Disguise line, because Cryotek's only toy (so far?) was labeled as being a part of that line. But although Cryotek has appeared in a handful of official stories, none of them are Robots in Disguise stories. Indeed, all of them are compatible with the Beast Wars era, especially as seen in 3H's Universe comics. So, if the classification of Cryotek was on the basis of his character, he'd be grouped with the Beast Era.

Although Cryotek's toy was a Target exclusive, pretty much all of the character's official fiction has been through the various incarnations of the Transformers convention and/or club over the years. This makes it appealing to think of Cryotek as a club (or convention) exclusive, even though this isn't actually true. As with pretty much all exclusives, Cryotek is a repaint of a previously existing toy: in this case, Transmetal 2 Megatron. In fact, Cryotek's official bio suggests that he copied Megatron's powerful Transmetal 2 body to create this form.

The original "Transmetals" were Beast Wars toys with chromed parts in beast mode. The idea was that whereas the original Beast Wars characters were robots with actual fleshy beast modes with skin and muscles and such, Transmetals were "inside-out," with robot modes showing such organic animal characteristics and beast modes that appeared entirely mechanical. Transmetals 2, in turn, retained chromed parts, but did more of a mix-and-match of what organic characteristics showed up where. Most Transmetals 2 are rather monstrous in appearance. This mold is, by contrast, rather elegant. Still, the original Megatron version of this mold was marketed as a Transmetal 2, so Cryotek is generally considered a Transmetal 2, as well. 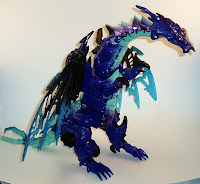 Although a bright blue dragon may not be the most "realistic" alternative mode, it is nonetheless very striking. There is a lever on back on the toy that allows you to open and close the dragon's wings for flight, and a missile fits inside the dragon's jaws that can be fired when it opens its mouth. Add in the head-mounted missile launcher in Cryotek's robot mode, and the toy evokes a very powerful character. This is especially appropriate given Cryotek's rather unique bio, which characterizes him as a Cybertronian "criminal overlord." Even if, like any good mob boss, Cryotek prefers to let underlings do his dirty work, he has to be able to enforce his will through sheer force when necessary.

This toy has another alternative mode which appears as more of an afterthought than a real mode. It's officially called a "transportation mode," but it's often referred to by fans as a "dragster," no doubt taking advantage of the pun. Although most Transmetals 2 toys weren't designed with "third" modes like this, they were common in the original Transmetals toys, and I wonder if some of that reasoning carried over when the TM2 Megatron mold was being created. Or, it might be nothing more than that Hasbro thought such a large toy should have an extra bit of play value tossed in. Who am I to argue?
Posted by Mark Baker-Wright at 12:00 AM