I haven't featured a lot of Beast-era characters, mostly because my collection has comparatively few of them, but it's high time I got around to this one. Magmatron was originally a Japanese exclusive, created for the Beast Wars Neo line. Magmatron is the "Emperor of Destruction," a title that the Japanese toymakers seem to like attaching to all sorts of evil Decepticon (or rather, Destron) and Predacon (or rather, again, Destron) leaders. 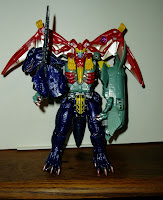 This version of the toy is the Japanese original, from 1999, but it's worth noting that Magmatron was released in America the following year as a Target exclusive. The especially weird thing about the American version is that it was actually released as a Maximal (i.e., a good guy!). At least, so his bio card indicates. However, that version of the toy still has Predacon spark crystals. Confusion abounds! 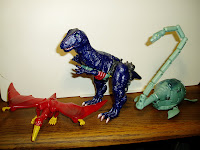 Magmatron doesn't transform in quite the same way that most Transformers do. Rather, you take him apart, and the components each form their own beast mode. These beasts are (from left to right) given the oh-so-original names of "Skysaur," "Landsaur," and "Seasaur." These beasts don't form separate additional modes on their own, but are instead simply components of the larger toy. In some ways, this can be considered similar to the old Duocons, except that those guys were robots that split into two vehicles that didn't transform separately, rather than three beasts. 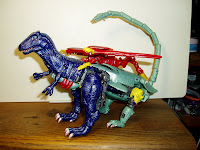 Unlike the Duocons, however, Magmatron does manage to get one more transformation out of these parts when reassembled as part of a single whole. Several words come to mind to describe this thing: "monstrosity," "creature," "kibble-former," but perhaps the best word is "chimera." In this mode, Magmatron shares a bit in common with the Fuzors (and, indeed, his American bio card calls him one), in that the mode is clearly made up of parts of different animals. This mode's more than a little unwieldy, though, so it's another of those that I've done pretty much just for the purpose of taking this picture, after which I may never use this mode again.
Posted by Mark Baker-Wright at 12:00 AM