In the beginning, there was Optimus Prime. The original leader of the Autobots (at least in real-world terms), Optimus Prime is the standard by which all other leaders are measured. It is perhaps not surprising, then, that more toys have been devoted to this character than any other. As I celebrate the one-year anniversary of weekly Transformer features on this blog, and 2009 is the 25th Anniversary of the Transformers franchise, it only seems appropriate to devote some space to the 20th Anniversary version of Optimus Prime from 2004. Of course, it's fudging things a bit to call this a 20th Anniversary toy. This mold was originally released in Japan as "Masterpiece Convoy" in 2003 (too early for the 20th Anniversary, although admittedly only by a month). But since I have the Hasbro version, we'll go with the "Anniversary" name they gave it.

As the name "Masterpiece" might imply, this toy attempts to give fans a version of Optimus Prime that pulls out all the stops. And it truly is an impressive toy. I'll say that right up front, because this needs to be kept in mind whenever I have something less complimentary to say about it. And the first "less than complimentary" thing I have to comment on the truck mode. It's nice and all, but just by looking at it, one still gets the impression that it was done almost as an afterthought. I'm not talking about the short smokestacks, although fans are eternally peeved about that problem. That's just something that Hasbro feels that they have to do for safety reasons, and no amount of fan complaining isn't going to get around that. No, I'm thinking more about the fact that the proportions are just... "off" in regard to what a real truck would look like. The other minor peeve I have with this toy is that Hasbro seemed to feel it necessary to put "battle damage" over certain parts of the toy (like around the Autobot insignia seen here). The Japanese version doesn't have this so-called "feature," and I've never cared for it. Suffice it to say, I wasn't consulted.... 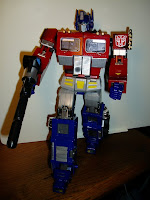 If the vehicle mode was an afterthought, it's only because the priority for this toy was getting the robot mode just right. And I'd say that they've more or less succeeded. The only real quibble I have is the presence of more of that "battle damage" at Optimus Prime's mid-section, but what's done is done, and it's not too difficult to overlook. This mode has a rather amazing range of stable poses. My brother was able to demonstrate this perhaps better than I can, but he was using items that didn't come with Prime. Here's another shot that I took of Prime on his own. 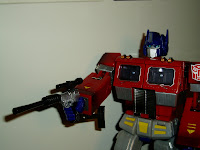 This toy really shines when one accounts for some of the minor extra details they added in. First off, those fists aren't just pieces of plastic with holes in them where you can insert a weapon. Those fists actually open up and grip the weapon. While Prime doesn't have the individually posable fingers that a couple other large toys have, that actually doesn't bother me much at all. For one thing, I have absolutely no interest whatsoever in making my toys do rude hand gestures. For another, I'm actually concerned that so much posability is asking for trouble in the form of loose finger joints in the future. I'm not particularly concerned that Prime will someday be unable to hold his Ion Blaster, or the scale-appropriate Megatron seen here. 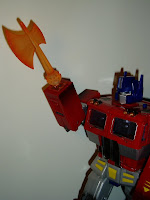 The designers of this version of Prime seemed to take delight in giving homage to features that showed up rather rarely in the cartoon. That hand-held non-transforming Megatron is one example. This "Energon Axe" is another. The only time this ever showed up in the original Transformers cartoon was in the second part of the original 3-part miniseries, when Prime uses it to battle Megatron atop a dam (this incident was also copied almost exactly as part of a UK comic story, although the retelling is so similar I hesitate to call it another instance of the axe's use). Even so, this axe has somehow become iconic, and so other Optimus Prime toys over the years have included a similar accessory (unfortunately, I don't think most versions including the axe have ever been available to the mainstream American market). 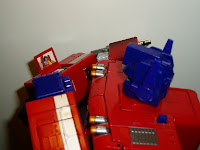 Taking advantage of the toy's remarkable articulation, both arms have "Datacom Interfaces" (that's what the instructions call them) that Prime can use to communicate with (or perhaps, in the case of the image of Starscream seen here, spy upon) other Transformers (the image on the other arm's interface is that of Bumblebee). While I'm on the topic of communication, I should also mention that Optimus Prime's head has a button in the back that, when pressed, moves the faceplate just a little bit, as if to emulate Prime "talking" behind it. Again, a rather minor touch, but it does demonstrate the amount of care that went into creating this toy. Unfortunately, I don't know how I'd "show off" a feature so subtle with a static image. 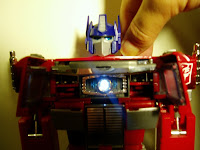 If the designers were willing to give such time and attention to features such as Prime's Energon Axe, you'd better believe that they also included what has perhaps become Prime's most iconic accessory of all, the Autobot Matrix of Leadership, which stores inside Prime's chest. My apologies for the fuzzy picture here, but I wanted to demonstrate how the Matrix lights up when the button on Prime's shoulder is pressed. You can even take the Matrix out, put it in Prime's hands, and have him open it up (to eradicate the "hate plague," perhaps?). Last week, I talked about how gimmicks often get in the way of the figure itself, but for the most part, the gimmicks on 20th Anniversary Prime are rather unobtrusive (indeed, although I did criticize the vehicle mode earlier, that seems to have been caused more by attempting to faithfully replicate Prime's animated character model in robot mode than by any of these gimmicks). That's an amazing achievement in itself. Of course, it should be noted that all this craftsmanship didn't come cheap. This toy easily sold for about $70 when new. In fact, I'm such a cheapskate, I wouldn't have this toy at all if it wasn't for an offer I found online that enabled me to get Prime for free by committing to a DVD club membership (which, having completed the minimum requirements long ago, I have since canceled). Having managed to find a way to get this toy while remaining financially responsible, I'm rather glad to include it as part of my collection.