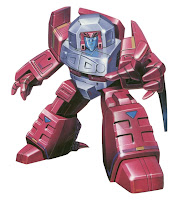 This entry is a bit of a throwback to the first few weeks of this feature, when I was featuring Generation One (and some Generation Two) toys that I've actually had since they were originally released. Although I have had this toy since that time, I didn't include this toy when I was doing those entries because it was still at my parents' home in Kentucky, but since it was returned to me a few months ago, it seems only appropriate that I feature it now, in my last such entry before celebrating a full year of Transformers collection posts (no, I'm not discontinuing the feature. In fact, I've something special planned for next week).

By 1988, the G1 line was clearly not what it once was. As there were no longer any new episodes of the Transformers cartoon to look forward to, the designers had to rely more and more on unique gimmicks that would encourage fans to continue buying toys. One such gimmick was to incorporate a flint mechanism, so that the toy would emit sparks when rolled along a surface. Thus, the Sparkabots and Firecons were born. These toys all shared more or less the exact same gimmick. One group was simply affiliated with the Autobots, and the other was with the Decepticons. This kind of parallel grouping, with identical gimmick, has been seen elsewhere. 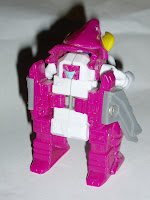 One common criticism of the late-G1 era is that such gimmicks seemed to take priority over the basic gimmick of transformation itself, and resulted in at least one mode (if not both) suffering for it. In the case of Sparkstalker, a Firecon, I feel safe in saying that it's the robot mode that suffered the most. No posability whatsoever, unless you count that he can kick with his legs (kind of). I'm also personally annoyed that I can find no way to make sure that the two halves of the robot stay joined together properly, so as to avoid that visible line running right up and down the center (worse at the top), where the two halves don't quite meet up. 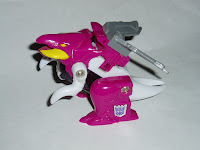 If you look closely at the leg of Sparkstalker's monster mode (click on the image to get a much larger version), you'll notice that the Decepticon faction sticker is sitting in a square indentation. Clearly, these designs were created right at the end of the time when Transformers still featured rubsigns: square heat-sensitive stickers that revealed the faction symbol when rubbed (or left in a warm environment). For a few years, Hasbro advertised the rubsigns as evidence that your toy was a "true" Transformer. I guess that, by 1988, they didn't care about authenticity so much....

Oddly enough, Sparkstalker was recolored and released in the Generation Two line, but only in Europe, and not as a "Firecon," but as a "Sparkabot," despite still being a Decepticon. Fellow Firecon Flamefeather was re-released in this way, as well. This may be the only example to date of Decepticon characters being given a "-bot" faction designation (there are a few Autobot-affiliated characters that have been called "-cons," though).

Besides being a limitation to figure design (since they had to work around the sparking mechanism), another problem with these sparking toys is that, after a bit of use, they just wear out, and won't shoot sparks any more. On the other hand, I suppose it's just as well. There was apparently a Dave Barry article a number of years ago demonstrating the fire-causing potential of such sparks (featuring not a Transformer but, oddly enough, Rollerblade Barbie), and Hasbro, ever vigilant when it comes to kids' safety, won't ever do sparking toys again (I cannot speak to whether or not the more serious-sounding incident referenced in the article ever actually occurred).
Posted by Mark Baker-Wright at 12:00 AM