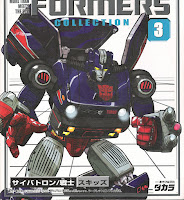 It's Generation One time again! Unlike the other times I've reviewed G1 figures in the past, this one isn't technically from the '80s, but rather is a more recent reissue of a figure from that period. This particular specimen, Skids, is a Japanese reissue, which is notable because Skids never actually got a "normal" release in Japan back in the '80s, having only ever been released as part of a multi-pack with two other figures (both which had also never been released in Japan previously, although one got another release in just another couple of years over there), so the "reissue" was actually the first time that Japanese fans could ever buy Skids on his own. A lot of fans don't remember Skids. He barely ever appeared in the cartoon, and is arguably the rarest of all the Autobot cars released in the first two years of the toyline. He did, however, have a memorable run in a couple of issues of the Marvel comic. Indeed, he's one of very few Autobot cars to get an issue devoted almost entirely to him. Those fans who do remember Skids apparently only remember him on the basis of this scene, which somehow manages to get mentioned almost anytime the subject of Skids comes up.... (And people wonder why male comic book fans have such a bad reputation....) Fans also tend to be confused about the actual size and nature of Skids' vehicle mode. The picture linked above clearly shows Skids as the size of a minivan. But Skids isn't intended to be a minivan, but rather is a Honda City Turbo, a vehicle that never saw wide release in the United States. It's far more comparable in size to a station wagon than to a minivan. But when one considers that scale always has been wildly variable in the Transformers line, it can perhaps be forgiven that Americans who (mostly) had never seen a City Turbo before would see Skids' general shape and assume that he turned into a larger vehicle.
Posted by Mark Baker-Wright at 7:00 AM