Over nearly 25 years of Transformers product, Hasbro has tried to maintain a balance between coming up with new characters and concepts, and giving homages to characters and concepts that have come before. The first few years of the original line (roughly from '84-'86) are homaged especially often. When the Alternators line came out, there were apparently at least three main goals: 1) Create a line of toys that is entirely within a particular scale (in this case 1:24, which is commonly used for model cars). 2) Create a line of toys that are licensed by the actual automakers themselves, and therefore accurately resemble the vehicles they purport to turn into. 3) Create new forms for well-loved characters from the Generation One era. 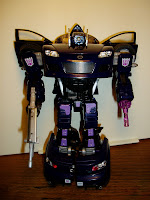 Because most of the automobile-form Transformers have always been Autobots, there haven't been all that many Decepticons in the Alternators line, and most of those that were in the line were repaints/remolds of molds actually created for Autobot characters. Such is the case with Shockblast, which was remolded from the Alternators version of Jazz.

If you've clicked that Jazz link, or recognize the robot form of Shockblast as resembling this character I reviewed several months ago, you've already noticed that neither of these Alternator toys have the same name as their Generation One counterpart (neither did this one I reviewed before Transformer reviews were a regular weekly feature). Basically, what happened is that, with toys, a company can only continue to claim a trademark to a certain name so long as the name is actively used by the company. If a name is not in current use by one company, another company can use it on their own product. In the case of the name "Shockwave," another toy company currently had it on their own toy, rendering the name unavailable for Hasbro, and so the substitute name "Shockblast" had to be used. However, if the resemblance isn't enough to tell you that this toy is really supposed to be Shockwave, click on the picture of the robot mode above and check out the license plate (visible at the robot's toes). This situation has since been rectified, allowing current toys to use the "Shockwave" name once again. 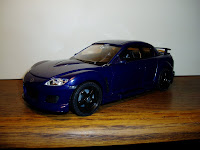 Shockblast turns into a Mazda RX-8, a far cry from Shockwave's distinctive space gun mode, and I'm actually rather impressed that the Alternator toy's robot mode looks so much like the classic character given how completely different the alternate mode is (and even more when one considers that the mold was created with an entirely different character in mind!). The toy's front wheels are pegged together so that if you turn one, the other turns with it (a common feature in Alternators). Also, the vehicle has doors that open and close like real doors (that doesn't happen all that often in non-Alternator Transformers!), but the area inside isn't quite large enough to fully accommodate an action figure of the appropriate scale. There's really nowhere for the driver to put his/her feet!
Posted by Mark Baker-Wright at 7:00 AM