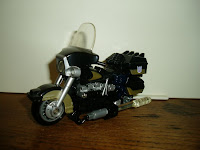 I've already mentioned that the Robots in Disguise line contained quite a few repaints of toys that had previously been used in other lines. I don't think I've yet mentioned that the line, originally created in Japan as "Car Robots," wasn't originally intended for release in America at all, but was eventually brought to the states as something of a time-saving measure. When the Beast Machines line was ending, Hasbro was originally planning to continue the Transformers concept with a line they called "Transtech." Although a number of fans were excited about this line, which promised to return a few Generation One characters alongside Beast Era characters, all in new (arguably more science fiction-based) forms, Hasbro decided to scrap the concept altogether (having seen some of the sketches, I didn't shed any tears over this decision, but your mileage may vary...). Having spent so much time developing Transtech, Hasbro was unable to release a new line of toys in a timely manner, and wanted to make sure to do things right. Since Takara had already gone to the trouble of creating a whole line of toys that hadn't yet had an American release, including a cartoon series that would keep that Transformers concept in the American consciousness, it was a no-brainer to seek the rights to have those toys brought over here. Make a few modifications to the vehicles, dub the cartoon, and viola! "Robots in Disguise": a line of toys able to bridge the gap between Beast Machines and the line that Hasbro would design next (eventually to be called "Armada," which we've discussed a bit already) 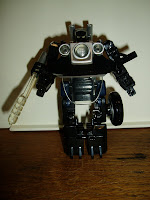 However, the Japanese "Car Robots" line wasn't quite large enough to yield sufficient toys to keep customers happy for the whole eighteen months that Hasbro would need to get Armada ready, so Hasbro fleshed out the "Robots in Disguise" line by repainting other molds that they had available. Axer, seen here, was a 2002 repaint of a Generation Two "Laser Cycle" called "Road Pig." Axer was noteworthy as being the first time that one of the "new" Action Master characters of 1990 had a name reused on a transforming toy (in fact, I think it remains the only example of this phenomenon to this day!). And since Action Master Axer himself came with a motorcycle, actually having Robots in Disguise Axer turn into one seems an appropriate choice.

The main gimmick of the G2 "Laser Cycles" was that they had a weapon that would light up when a button was pushed. Axer retains this gimmick.

As previously established, Axer turns into a motorcycle. The Transformers line has had a rather mixed history of success (or lack thereof) with motorcycles, as we'll explore further over the next few weeks. 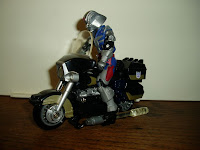 For now, it's worth noting that Axer is one of few Transformers that is actually just about the right size to accommodate a G.I. Joe figure. It's not a perfect fit, but it's certainly close enough that the Cobra Commander figure shown here (chosen because this is one of few figures I have in my limited Joe collection that wears a helmet! Besides, it's appropriate that the bad guys should be paired up.) doesn't look too ridiculous. 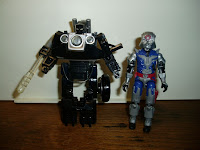 This also gives us a chance to see what at least this character would/should look like in robot mode when compared to a human being. Most Transformers media tend to vary pretty wildly (sometimes even between frames in the same story!), in their depictions of how large Transformers should be compared to humans (check out this picture of Optimus Prime's head for a particular bad example. Snake Eyes could never hope to drive a semi as big as what that Prime would turn into!). Axer doesn't look like he'd be all that tall, really....
Posted by Mark Baker-Wright at 7:00 AM