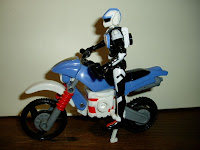 Last week, I mentioned that Hasbro has had a rather mixed record of success (or lack thereof) when it comes to Transformers that turn into motorcycles. This week, we'll look at Energon High Wire. This is a larger version of the same character that was sold as a Mini-Con as part of Energon Perceptor. Included with High Wire is Kicker, a human who played an important part in the Energon cartoon. To the best of my knowledge, this is the only time in the entire history of American Transformers toys that a non-transforming humanoid action figure was sold in a main line (Nebulans, included with the Headmasters and Targetmasters, could of course transform. Also, there have been a few figurines, but these don't really qualify as "action figures," and a couple of Japanese exceptions, as well*). 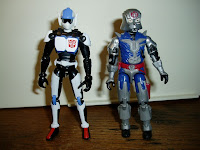 Since the human action figure is specifically included with a Transformer it's intended to "ride," one would assume that the two would be in scale to each other, but I think the motorcycle is a bit too large. In fact, I'd argue that Axer's motorcycle mode was a much better scale match for Cobra Commander (shown here to demonstrate that the two figures are the same size), and that wasn't even intentional! 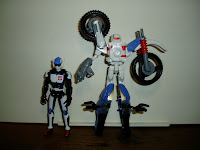 High Wire has essentially the same transformation as his Mini-Con counterpart, with a couple of tweaks available due to the larger size. The right fist is an actual fist now, although the left arm still ends uselessly with the wheel on the end. In fact, it's really one of the most pathetic-looking excuses for a robot mode I've ever seen, especially in a toy of this size. I picked this one off of eBay pretty much exclusively for the Kicker figure, since Kicker is a unique oddity in the history of the line. But apparently my High Wire specimen is a bit unusual, in that most High Wires have an Autobot symbol on the gas tank that mine lacks. The seller told me that this was because it was either a prototype or a production sample, although I think a lot of eBay sellers throw those terms around anytime they have something unusual, and don't make any guesses as to the veracity of that claim. I certainly have no idea if the lack of an Autobot symbol makes my toy any more valuable. That's generally not why I buy these things, anyway!
*Obviously, I wasn't considering Action Masters as "main line" when I wrote this. This is odd, since I typically do. Or maybe I didn't think of them as "humanoid." I don't remember.
Posted by Mark Baker-Wright at 7:00 AM