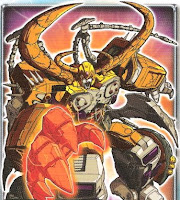 The story of this toy actually goes all the way back to 1986. The original animated Transformers movie (long since forgotten by all but the long-term fans, and already overshadowed by last year's summer theatrical blockbuster) was released in theaters (coincidentally with a release date of August 8th: my birthday! Yes, I was there on the first day...). Although there was plenty of "traditional" Autobot vs. Decepticon action in the movie, the real bad guy of the movie was a large planet-sized Transformer named Unicron (voiced by legendary actor Orson Welles, in his final role), who threatened other planets by actually eating them! And if that wasn't enough, Unicron turned into a humongous robot who could rip planets apart with his bare hands. Although Unicron was defeated by the end of the movie (was there any doubt?), the character would resurface time and time again throughout the years. Aware of Unicron's popularity, Hasbro made several attempts to create a transforming Unicron toy, but nothing ever made it past the prototype stage. It wasn't until 2003 that a proper Unicron toy finally made to toy shelves. By this time, of course, Generation One was a thing of the distant past, and so this Unicron is in some ways more of an homage than a representation of the Unicron that appeared in the 1986 movie (although the official line is that there is but one Unicron who exists throughout all Transformers continuities, that causes some headaches among fans who try to keep everything straight. It's enough to acknowledge that the toy was created with the then-current Armada line in mind). Standing a little over a foot tall, Unicron is by no means the tallest Transformer ever made, but he's still pretty large. Although the toy does make a fair attempt to turn from a robot into a planet, it actually cheats in a couple of significant ways. For one, it's not really a proper sphere, but more of a semi-sphere which sits on a flat bottom surface. Also, a good portion of the sphere is just "shell" that needs to be moved out of the way (and, in fact, can be removed altogether with practically no effort). In the years that have followed, Hasbro has made two other toys that turn into planet-like alternate modes, and both are more convincing spheres than this Unicron toy. I'll get to those in due time. For now, the focus is on Armada Unicron. The gimmick for the Armada line was the introduction of the "Mini-Con." Mini-Cons were tiny Transformers (roughly Micromaster sized) which could plug into larger Transformers to activate special features. Since this toy was created with the Armada line in mind, it also had to include a Mini-Con and special Mini-Con-activated features. The Mini-Con that came with Unicron was called Dead End. Since Unicron turns into a planet, it perhaps is only natural that Dead End turns into a moon. Although tiny, Mini-Cons are Transformers in their own right, and indeed a major plot point of the Armada series (especially in the comic written for the series) centers around the fact that Mini-Cons are a third faction of Transformers that aren't always thrilled at being sought out by the larger Transformers for their special powers. However, Dead End never really showed up in the comic, and his only appearances in the cartoon were as mindless drones that Unicron creates dozens and dozens of, all of which were easily defeated. Having gone to the trouble of adding Dead End to the Unicron toy, it seems that none of the fiction writers could really figure out what to do with the character.... The easiest Mini-Con-activated gimmick of Unicron's to demonstrate in a still photo is Unicron's giant chest missile. Basically, if you plug a Mini-Con in a port in Unicron's back, the whole chest cavity opens up, a missile is revealed, and it fires across the room with an accompanying sound effect. Let smaller Transformers beware!
Posted by Mark Baker-Wright at 7:00 AM