As you've probably heard by now, the United States is abandoning the analog television wavelengths, effective February 17th, 2009. If you don't already happen to have a digital television, and you don't have cable or satellite service hooked up to your analog television, you won't be able to see anything but static on your set after the middle of February next year.

While I understand a bit of why the government wants to force a switchover to digital, I'm not entirely thrilled with the decision to switch being made for me. Sure, they're providing coupons to defray the cost of getting a converter so that analog televisions can read digital signals, but the switch still disproportionately affects the poor. After all, most who can afford cable or satellite service (to say nothing of a true digital television) will already get (or have already gotten) them on their own. Even using the coupons, most folks will have to pay some $20 or so apiece for their boxes, and that's money that they'd probably spend on something else if they weren't forced to make a choice between paying the cost and forfeiting television access altogether. 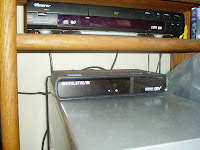 But I don't expect to get anywhere fighting that battle. What's done is done. My own coupons came in yesterday, and there's a Radio Shack just down the street from where I live, so I've already picked up my converter boxes, and have installed the first one on the small TV next to my computer. It's an easy enough installation, and now I'm ready for February... or at least I will be once I've installed the other one later today.

Email ThisBlogThis!Share to TwitterShare to FacebookShare to Pinterest
Labels: television