Here's another one from the pre-blog files. I had the privilege of getting a copy of this custom as a prize for winning a contest done by another Transformers fan (who went by the screen name of "Crazy Steve") on his own website (which is no longer accessible). Basically, I was asked to write a poem about Scrounge, the obscure Autobot who was introduced, and promptly killed off, within a single issue of the old Marvel Transformers comic (you can see more about Scrounge here).

Here's the poem I came up with: 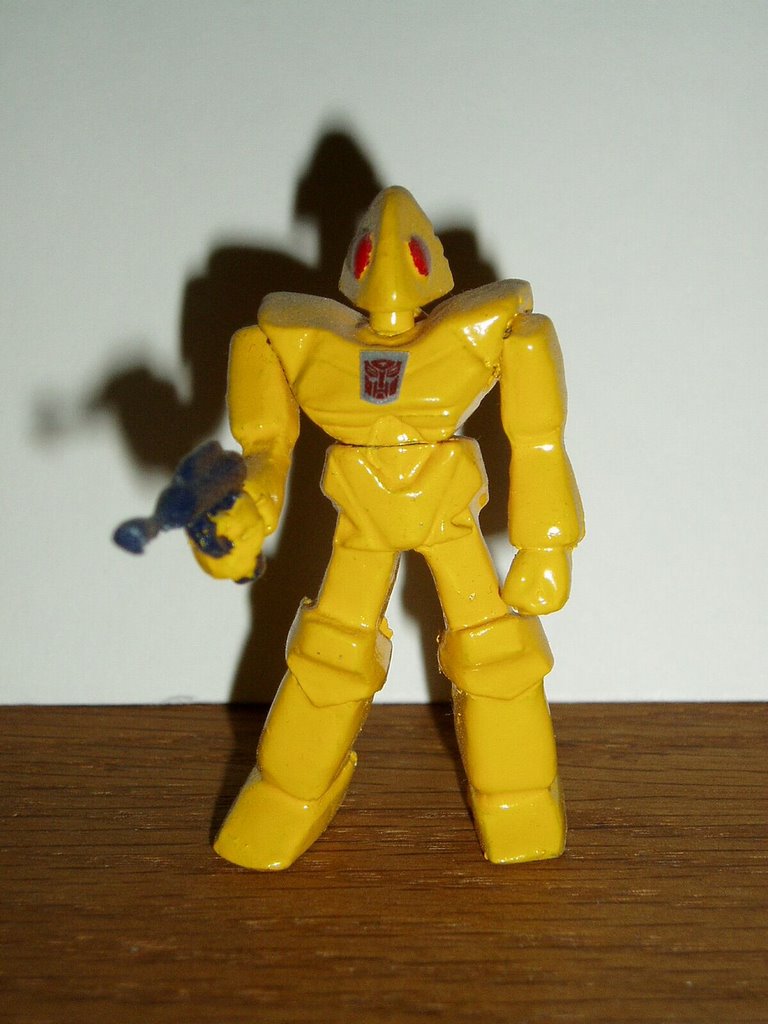 But Scrounge was discovered
Smelted, won't be recovered. 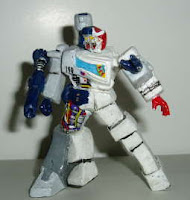 Anyway, that little bit of nuttiness won the "grand prize" of Steve's contest, a custom-made model of the Ratchet-Megatron fusion featured in a couple of issues of the old comic. This creature had been an important part of the background for a post-comic bit of fiction I'd written shortly after high school, the first part of which can be found here (I actually did three entries, covering the rest of what I'd done), and so was pretty pleased to have a three-dimensional representation of this character: something that almost certainly will never be granted us from any official Hasbro release.

Anyway, Steve had apparently asked me to write up a review of the toy. Here's that review, rescued from the mists of time!
The "Mockery of Life" is one of several names given to describe the fused Ratchet-Megatron monster that appeared in issues #69 and #70 of the original Marvel G1 comic. This custom has been created by making a new mold from parts of the Ratchet and Megatron PVCs currently (at the time) on the market. Steve was able to mold a few necessary extra bits out of Sculpey to create some of the details, such as the exposed electrical wiring and the facial expressions, that did not exist in either of the original figures, but which were required because of the nature of this character.

One problem (Steve encouraged me to be brutally honest in my review) with the figure was that it arrived in the mail with two of its connecting pegs broken. These were the left shoulder(s?) and right leg(s) pegs. In order to get the figure together, I borrowed an idea I got from M Sipher's "Homebaked PVC" site, to drill a hole where the old peg was, place a new rod in its place before supergluing the joint together. In the case of the leg(s), I got the rod by clipping a small part off of the plastic frame that remains after removing the missiles of reissue G1 Smokescreen from the packaging. For the shoulder, I cut a staple into pieces and used one of the pieces to provide the connecting rod (though it's too small of a sliver to be called a "rod"). Once re-rodded and superglued together, it holds together much better, but I did knock the leg loose again while moving to a new apartment, forcing me to have to reglue the leg together again. In any event, I don't expect to be able to re-position those joints in the casual way you usually can with PVCs. In addition, it should be noted that the connecting rod to Megatron's deformed fusion cannon is also very loose fitting, and comes off easily. However, since it does remain in place if untouched, I did not choose to make any modifications there.

The "Mockery of Life" is amazingly detailed, especially when one considers that many details had to be constructed completely from scratch. Anyone familiar with the Transformers comic issues this character appeared in will instantly recognize it, as the figure does an amazing job of translating the 2-dimensional character to a 3-dimensional reality. I might have handled the paint job a little differently, as the paint job comes of as "messy" to me. In some ways, this is entirely appropriate for this character, who is indeed a messed-up conglomeration of two robots, barely functioning with exposed parts and leaking all over the place. However, this paint job is messy in places that probably should not have been. I hasten to point out that Steve himself recognizes this, and anyone who reads his own reviews of his work at Scrambled City will know that he does not come off as self-aggrandizing (please note that this link is an old one, archived through the Internet Archive's Wayback Machine). Nor do I believe that I would have done a "perfect" job. Anyone who has seen the customs on my page knows the extent to which I myself am not always able to make perfect lines. However, I am not a huge fan of glossy paints, preferring to use flat enamels in most cases. They look, in my opinion, cleaner in the finished product. Also, I don't think I would have painted the black joint lines that Steve did. Again, this is largely just a matter of taste and interpretation, but is offered in the spirit of collaboration.

All in all, this is an amazing figure, and a welcome addition to my collection. Any quibbles I have are minor ones.
Posted by Mark Baker-Wright at 7:00 AM