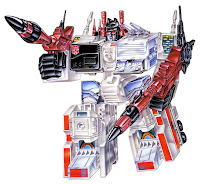 OK. This is going to be tricky. For most of my old Transformers, I can safely show off most of the toy's features in only a few pictures. But then there's Metroplex. Now, if I were doing this weekly project in order from "least interesting" to "most interesting," I'd probably have saved this one for much later (and I certainly wouldn't have done "Cookie Crisp Jazz" first!). But since I'm trying to do this in a roughly chronological order, there's no getting around "it's Metroplex's turn." Part of the problem isn't just putting so many pictures up, but also arranging the text around them in such a way that the blog entry doesn't look like a train wreck on most browsers. I may or may not have succeeded in that area, but I'll just have to let you be the judge.

Metroplex was one of two Transformers to come out during the third year of the original line that turned into a "city." Even ignoring the issues of scale that turning into a "city" obviously implies, Hasbro knew that any "city" Transformer had to be one of the larger toys of the line. Not only that, but they packed all sorts of features into this piece. The picture to the right of the first paragraph just shows the main "Metroplex" robot, with all of his weapons attached. This can be considered the "default" mode. But if you take off most of the guns, and add a couple of parts from Metroplex's city mode that aren't used in Metroplex's robot form, you can reassemble them into another robot, which the name-creating geniuses at Hasbro decided to call Sixgun (go ahead, count 'em! Two guns for the legs, two for the arms, two on his back, and one "hand-held" weapon, that's... wait a minute! And why does he need a "hand-held" weapon if he doesn't even have hands? They're just guns!). Let's move on to Metroplex's main alternative mode, the aforementioned city mode. In this mode, Metroplex is sprawled out and takes up a lot of desk space, so I don't actually keep Metroplex in this mode very often. However, this mode has lots of compartments and spaces intended to allow smaller Transformers ("Mini-Cars" such as Bumblebee were still available at the time, and the packaging showed several combiner limbs, as well) to interact with the city.

Even if you don't have any other Transformers (hard to imagine, if you're buying this one!), Hasbro made sure that Metroplex included a small car to interact with Metroplex: Scamper. Scamper was a little black car, reminiscent of (but not the same as!) KITT from Knight Rider. In fact, when I was a kid, I had painted a little red "scanner" light on the front of Scamper so that he would resemble KITT even more closely (I have since reversed the effects of that injudicious action!). If you put Scamper inside of the squarish compartment at the top of Metroplex's city ramp, you can push a black lever just above the compartment to cause Scamper to shoot down the ramp. Simple, but tons of fun for both kids and adults!

Scamper, being more of an add-on than a Transformer in his own right, had a transformation even more simplistic than most Mini-cars of the time. Take the guns off of the top, fold down the hood, and put the guns back on as arms. Metroplex also came with a tiny gun that was intended to go in the pegs on the sides of Scamper's fists to give Scamper a weapon, too, but I've since lost that part. However, given the myriad of parts that Metroplex came with, the fact that this itty, bitty gun is the only thing I've lost out of the whole set is something of an achievement! I'm sure I'll have it replaced someday, but it's hardly a priority. Anyway, we're not done detailing Metroplex's accessories. If you take the tower off of the right side of Metroplex's city mode and add another attachment, you can create a little tank, called Slammer. Unlike Scamper, Slammer doesn't transform into a robot. He pretty much only seems to exist in order to give the designers a way of dealing with one of the city parts Metroplex has without creating an unwieldy piece of kibble in Metroplex's robot mode. Unfortunately, the designers created another problem in creating Slammer: if you don't keep this guy in tank mode, there really isn't any other place to put the turret. Of course, back in the days of G1, the designers didn't seem to mind so much if a part didn't have any purpose outside of one of the Transformer's modes, but this kind of thing almost never happens today, as they find ways of storing pretty much everything in all modes one way or another. This is how I usually tend to keep Metroplex on display these days, showing off all the members of Metroplex's "crew." I do it this way since it leaves me with the fewest "spare parts" of any configuration I can think of. But even this doesn't use up everything. You may have noticed in the first picture (Who am I kidding? You didn't notice! Go back up and look now!) that the large brown guns in Metroplex's fists have missiles in them. The missiles have to be removed in order to form Sixgun, and they don't really "go" anywhere else. I usually just stash them in Metroplex's ramp compartment; behind that square black box with the Autobot symbol on the robot's torso. But I'm still not done detailing all of Metroplex's features! In addition to Metroplex's city mode, he has a "battle station" mode, in which Metroplex's guns are put to good use in a fairly compact fashion. The missiles are back in place, but unlike the Japanese version, they don't really fire, as Hasbro removed the springs from the "launchers" in order to follow US safety regulations. Even still, I'd use this mode more, except that I would still have no place to put the spare Sixgun parts (in his torso) that form another tower in Metroplex's city mode. Since they don't fit in that ramp compartment, I default to the robot mode above. But wait! There's more! As incredible as it may be after detailing so many features, I'm still not done yet. Metroplex's instructions tell you that you can create a "super robot" by adding combiner limbs to various points at Metroplex's shoulders and at his knees (the "kneecaps" remove to reveal connector points). Because most of the combiner limbs I own are cheap knock-offs, I chose to demonstrate this feature with a much later-era figure that uses a G1 combiner mold. It's a pretty random feature. Knowing that the Japanese marketed this toy as part of the "Scramble City" line that most of the combiners from this era were part of really doesn't do much to diminish the randomness of this feature in my mind. Just how is adding robots to Metroplex supposed to make him "super"? I don't really know. Perhaps they had the "Mini-Con" concept of the Armada line in mind, more than 15 years before its time!
Posted by Mark Baker-Wright at 7:00 AM