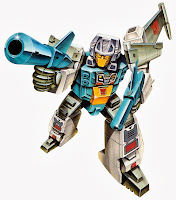 As the Transformers line was entering it's fourth year of existence, the folks who made the toys were trying to come up with new ways of keeping kids interested in the franchise. Ultimately, this led to practically every toy needing to have some "gimmick" beyond the idea of transformation itself. Some gimmicks have been better than others, and there is definitely a line of thought that suggests that the over-reliance on these gimmicks is at least part of what eventually doomed the original line in the early '90s. 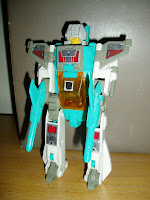 Year four, the midway point of the original line, saw the introduction of the Headmasters. These were robots with heads that came off and transformed into tiny figures that could pilot the larger robot's vehicle mode. One of these figures was Brainstorm. As with most of the regular-sized Headmasters figures of this year, the character's name had some kind of "head" reference (the others falling into this punnery were Chromedome, Hardhead, Highbrow, Apeface, and Skullcruncher, with an "honorable mention" for Mindwipe. Most of the Targetmasters, a related gimmick where the robots had weapons that turned into figures, had similarly weapon-related names.). 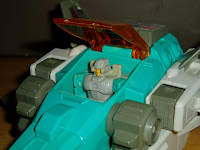 Brainstorm's head detached and turned into a figure named Arcana. The Tech Specs indicate that both Brainstorm and Arcana were scientists, and together they devised the technology that made the Headmasters possible. It's worth noting that this is at least one area where the American Transformers line and the Japanese one came up with very different stories for the same figures. While, in the American line, the small head figures were humanoid aliens (Nebulans) who bio-engineered their bodies to be able to transform, and the humanoid and the Transformer thereby achieved a kind of symbiosis, the Japanese went with the idea that the smaller robot was the "real" Transformer character (also called, in this case, Brainstorm. The character of Arcana doesn't exist in the Japanese version), and the larger body was simply a kind of mecha that the smaller robot controlled when in the form of the larger robot's head. Many fans prefer the Japanese origin as "more realistic." I actually prefer the American one, but that's just me, I guess. 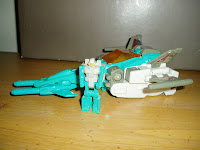 As the Transformers line moved more solidly into the realm of science fiction, and away from strictly Earth-based stories, the designers made less effort to ensure that each Transformer's alternate mode resembled some kind of Earthen equivalent. In the case of Brainstorm, the alternate mode is a kind of jet fighter that probably bears more similarity to Luke Skywalker's X-Wing fighter than to anything in the skies of the planet Earth (either at the time or since). This loss of emphasis on the "disguise" part of the "robots in disguise" concept is also cited by many fans as a reason for the decline of the Transformers franchise, but since the cartoon of the time (argued by the vast majority as the preferred form of Transformers fiction, although I've always preferred the comics, myself) really never did all that much with the disguise aspect, I think this argument overstates the case.

I actually really like the Headmasters concept, and find it a pity that so many people seem to argue that this was the "beginning of the end" for the Transformers. Perhaps I "doth protest too much" in my defense against these criticisms. In any event, I'm glad that I have been able to enjoy this toy for so long, and was especially glad to revitalize this toy a year or so ago with Reprolabels.
Posted by Mark Baker-Wright at 7:30 AM