Transformers fans have long had to accept that the names created for certain characters in another era don't always meet the intellectual property concerns of today, and that sometimes a familiar character is going to come out as a new toy with a different name. So it is that we got "Refraktor" in the early part of the Siege segment of the War for Cybertron trilogy in 2019. Long time fans will recognize that this is intended to be "Reflector," who had made appearances in the early days of the original 1980s Transformers cartoon (even though his toy was relegated to mail order status several years later, having been held back from the retail market due to what must have been a late decision by Hasbro). I'm not sure what changed since 2016, when BotCon Reflector was released with the original name (as several other Reflector homages had done in the years immediately previous), but it has long been understood that made-up names are easier to protect than common words, so perhaps Hasbro was just being extra careful this time around. 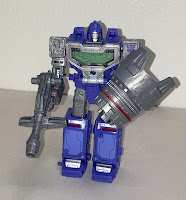 Like BotCon Reflector, Siege Refraktor attempts to replicate the look of the Reflector character from the cartoon. Fans of that cartoon will remember that one of Reflector's distinctive features was that he wasn't just a single robot, but tended to travel around with two nearly identical robots, who occasionally (but not always) spoke in unison. Typically, one robot had a distinctive chest feature, which can be duplicated on this toy by adding a small round accessory, as seen here.

Reflector is perhaps best remembered for his camera alt-mode, formed when three Reflector-robots merged together (even before the "giant combiner robot" concept was introduced to the cartoon). In past Reflector toys, this was achieved either by releasing Reflector as a three-pack (as in both the original and BotCon sets) or by giving a single Reflector robot the camera mode. This was not done for the Siege toy. If you only got a single Refraktor toy, you had to make do with this alternate mode, which official Hasbro press releases called an "Artillery Hovercraft vehicle." 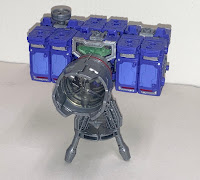 But I doubt many people... even kids who wouldn't remember the cartoon, sought out this toy on that basis. Thankfully, Hasbro designed Refraktor very much with the camera mode in mind. You simply had to pick up three identical sets, and then combine them to get the camera mode, which cleverly included both the lens and a stand by virtue of the the weapons, which themselves combined. That's not to say that Hasbro made it easy to find three Refraktors to pick up (most stores often only had one on the shelf at a time!), but the option was there for diligent fans to seek out. It's probably easier to do now. If you look for Refraktor on eBay, you'll find quite a few available, and many sellers make it even easier by selling three at a time. Be warned, however. Now that the price of a Deluxe (still, oddly, the name for the main size-class of Transformer) has gone up to meet the pressures of inflation, multiplying that increase by three does mean that a complete Refraktor camera set can result in sticker shock.
Posted by Mark Baker-Wright at 11:00 AM