Power of the Primes Punch/Counterpunch (2018) 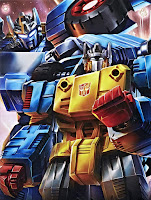 To the delight of many old-school fans (and to the chagrin of others, including perhaps those young enough not to have the same reasons for nostalgia that we older fans might have), an increasing number of characters from the original "Generation One" Transformers line have gotten updated figures in recent years. The "double spy" character, Punch/Counterpunch, is no exception, having been given a new toy as a special release toward the end of the Power of the Primes toyline.a

The main gimmick of the double spy, of course, is that two distinct robot modes are possible with a single toy. For the original G1 version, that mostly just meant one robot mode was on the back of the other, and that basic reality holds true for this toy, as well, although advances in toy technology over the last 30 years makes the transformation a bit more convincing this time around. We'll start with an image of Punch, the Autobot mode that (usually) is the character's true identity. Here's a side-by-side comparison of the PotP version of Punch alongside the original G1 toy. 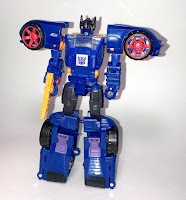 Here's Counterpunch, the robot mode that the double spy uses to infiltrate the Decepticon ranks. The fiction usually acknowledges that Autobots and Decepticons alike understand that Punch and Counterpunch are related to each other, so the names themselves aren't as much of a giveaway as one might expect, but one still wonders how it is that the Decepticons never seem to do any more than suspect that Counterpunch might be a liability. As before, here's a side-by-side comparison of this mode alongside the G1 version. You'll notice that the G1 toy gave distinct weapons to each robot mode, whereas the PotP version made do with a single hand-held weapon used by both robots (the "secret" part of "secret identity" is getting harder to keep all the time! But it is noted that the PotP weapon is a closer match to the weapon used in Punch/Counterpunch's appearances in the Japanese Headmasters series).

As before, the double spy uses a single vehicle mode, whether posing as Autobot or Decepticon (just how does he keep that secret again?). It's a reasonably faithful update to the original toy's vehicle mode, and if I have any complaints at all, it's only that getting everything to peg together cleanly requires some finessing, which is a bit scary since so much of the vehicle mode shell is clear plastic which I'm always afraid could crack.b It's never happened, yet, though! Here's a comparison with the G1 toy.

Perhaps because this version of Punch/Counterpunch came out as part of the Power of the Primes toyline, it comes with a couple of extras which really have nothing to do with Punch/Counterpunch at all, but which tie into the rest of the toyline. The first is a "Prime Master" figure of Prima Prime, purportedly the very first Transformer (at least in some versions of the Transformers mythology). He's compatible with the "Decoy Suits" available elsewhere in the line, as well as with the other extra accessory that came with Punch/Counterpunch, a piece of armor that, with pretty much every other Deluxe-sized figure to come out as part of the PotP line, would have doubled as a fist or foot for that figure's limb mode when forming part of a Combiner Wars-compatible combiner. Punch/Counterpunch has no limb mode (nor should it!), but Hasbro did engineer a place in the toy's vehicle mode to hold the armor piece if you want to use it (here's a picture). To use the Prime Master in this armor, it transforms into what is essentially a cube which (as I said in the entry that featured the "Decoy Suits") is functionally identical to the "Titan Master" heads used in the Titans Return line, only the cube features an abstract symbol rather than a face. Here's a picture of that mode. Prima Prime can also stand atop Punch/Counterpunch's vehicle mode, although it looks rather silly doing so (this picture isn't one of mine, and indeed features different Prime Masters).

Because this toy was (at least in the United States) an Amazon exclusive, a lot of fans may have missed it when it came out a few years ago, although the mold got another release just last year in somewhat lighter colors (but again exclusive to Amazon). Hopefully, if you missed getting the toy during one of those opportunities, you can find it on the secondary market for a reasonable price. It achieves the feat of giving you two distinct robot modes better than most other attempts to-date.
aOf course, Punch/Counterpunch also got a new toy back in 2010, as a club exclusive from Fun Publications. The Power of the Primes toy is a more mainstream release, albeit still an exclusive, at least in the United States, where it had to be purchased via Amazon. Also, the club toy's mold wasn't actually designed for this character, whereas the Power of the Prime toy's mold was.bAs I recall, an assembly error that plagues this mold, whereby the shoulders were put in backwards, makes this difficulty even worse, but I've long since fixed that....
Posted by Mark Baker-Wright at 10:25 AM