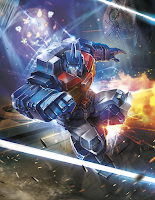 Completing the "Prime Wars Trilogy" after Combiner Wars and Titans Return, the Power of the Primes line focused on the return of "the Thirteen," the very first Transformers created by Primus (in this version of the mythos, anyway), each given the designation of "Prime." This is a concept that had been batting around in various Transformers continuities for several years by this point, with the actual members of the Thirteen varying slightly from iteration to iteration. While a few members of the Thirteen had received toys previously (here's just one example), Power of the Primes was the first concerted effort to give toys to all thirteen members.

The Power of the Primes achieved this, in large part, by selling members of the Thirteen as "Prime Masters," available at the low-end price point with "Decoy Suits." The Decoy Suits were, in fact, miniature versions of the outer shells that characterized the Pretenders from G1. These sets were sold under the names of members of the Thirteen. From left to right, these are the Liege Maximo, Megatronus, Micronus, Quintus Prime, Solus Prime, and Vector Prime. However, G1 fans would better recognize them as Skullgrin, Bomb-Burst, Cloudburst, Bludgeon, Octopunch, and Metalhawk.

Like the Pretender shells of G1, Decoy Suits opened up to reveal an inner robot. These were the Prime Masters. The figures were, structurally, pretty much the same things as the "Titan Masters" that came with Titans Return figures, and you could even fit each one atop the necks of Titans Return figures if you really wanted to, although the designs on the Prime Masters weren't actually faces, but rather icons intended to represent each member of the Thirteen. The idea with the Prime Masters is that you're supposed to be able to plug them into larger figures (often through an accessory that came with the figure), and the larger character was supposed to be granted some special power specific to that particular Prime Master (most larger Power of the Prime figures came with a card detailing how the combination of that figure with one of the Prime Masters would work. There were multiple cards for each figure, each detailing a different Prime Master partner, making the completion of a complete set of cards ridiculously impractical).

The Decoy Suits themselves turned into weapons that could be held via 5 millimeter pegs by most figures, and the Prime Masters could be plugged into them as seen here. To be honest, this feature is pretty meaningless to me, and even when I use the Decoy Suits as weapons (which is rare. I got them because they're mini-Pretenders, after all), I typically just leave the Prime Masters off of them. 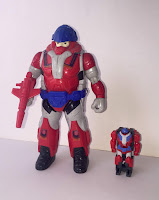 This, naturally, isn't a complete set (I apparently skipped Wave 2 entirely), but even so, only eight of the Thirteen were actually released this way. Of the other five, Onyx Prime came with an updated version of Predaking, while the remaining four: Amalgamous Prime, Nexus Prime, Prima Prime (often just called "Prima" prior to this release), and one called only "the Thirteenth" (which, ironically, was given an appearance based on Prima from the Marvel G1 comic), were only available with the "Throne of the Primes" set first made available at San Diego Comic-Con 2018. I didn't get any of those figures, either. As I said, I was more interested in them as mini-Pretenders, especially since I'm fairly confident that this is pretty much the only shot most of those characters will ever have at getting new toys. Indeed, given the way many fans feel about Pretenders, I'm amazed that this homage happened at all.
Posted by Mark Baker-Wright at 9:00 AM