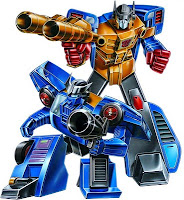 I promised that I would feature the original Punch/Counterpunch once the new club exclusive version finally arrived. That time has come! I'll focus on the original version today, and on the club version on Friday.

A toy from the 1987 line (that is to say, the same year that introduced the Headmasters and Targetmasters), this toy is often referred to as the "doublespy."  Punch is an Autobot who masquerades as a Decepticon named Counterpunch.  Apparently, it's public knowledge that the two robots are related to each other, as in the character's sole significant American appearance in the old Transformers cartoon, "Counterpunch" famously tells his Decepticon "comrades" that his "Autobot counterpart" is "nearby... real nearby" (this last part said as he transforms into Punch mode out of sight of the aforementioned Decepticons).

Remembering that this is a 1980's toy, one doesn't really expect even an ambitious (for its time) toy like this to go to the lengths that the more recent Animated Shockwave toy does to achieve unique appearances for each faction.  Whereas Shockwave goes so far as to have alternate vehicle modes for each of his identities, Punch/Counterpunch has to make do with just one, which the TF Wiki says is a Pontiac Fiero. 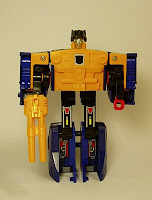 In my "teaser" post, I noted that this toy was designed to have a different "Punch" transformation than what the instructions finally made official.  I'm really not entirely clear as to why they changed their minds.  Although the official form is certainly taller and less stumpy looking, it really looks pretty bizarre from the waist down.  Also, you'll note that the official package art at the top of the page depicts Punch with legs that definitely seem to be drawn using the "dwarf" transformation as a reference, rather than the official transformation. 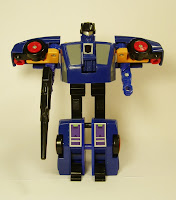 Transformation to "Counterpunch" isn't especially difficult. Basically, you turn the robot's back to face you, swap out the arms (and the weapon, although since there's no place to put the weapon not currently in use, I tend to have both robots holding both weapons all the time), make sure the toes are in place, and flip the cap on the robot's head to reveal the appropriate robot's eyes. For such simplicity, the new robot mode is strikingly distinct. Of course, it would have been more distinct if Punch was as short as originally intended, but I've pushed that point enough. And, naturally, one must suspend disbelief to imagine that no Decepticon ever looked at Counterpunch from behind and thought, "you know, that looks familiar...."

I got this specimen from eBay, and the stickers were pretty well-worn.  This toy looks as nice as it does now thanks to the miracle of Reprolabels.  I really can't recommend them enough.  Now, if only they'd finally get around to making those Gutcruncher labels I need....
Posted by Mark Baker-Wright at 12:00 AM