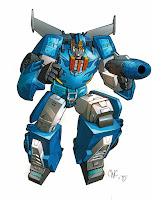 While it is certainly true that most of the most well-known characters in the Transformers franchise originate from what is now known as the "Generation One" continuity family, every once in a while a character in a new continuity captures the attention of the fandom. In fact, some of these newer characters sometimes end up with new toys that actually import them into more modern Generation One stories! Such was the case with Side Burn.

The original Side Burn was in the 2001 Robots in Disguise cartoon which, sadly, stands to be largely forgotten today (not only was it a generation ago, but the rights to the English translation are... ambiguous..., and thus it has seldom been released on video, and never within the United States). Robots in Disguise has the distinction of being the very first time that Transformers fiction was released which (despite some characters sharing familiar names) was explicitly not intended to be in continuity with anything that came before it. While Side Burn shared some obvious personality attributes and design cues with Generation One Hot Rod, he was very definitely his own character, and it would be pretty impossible to confuse the two.

That said, those shared design cues made the use of the "Classics" Rodimus figure a fairly natural choice when the Transformers Collectors' Club decided to create a new Side Burn figure, which featured in the Generation One cartoon-inspired "Wings of Honor" continuity. While many fans feel that this mold has not aged well, it is nonetheless a very attractive toy in Side Burn's distinctive blues and white. Released as the 2011 membership incentive figure, it is one of the (comparatively) more common club figures, with 4500 units made, and thus can be found fairly easily (if not easier than the admittedly more common Robots in Disguise retail figures). In fact, this is my preferred version of Side Burn, as the original version was so unwieldy to convert from one mode to the other, I sold it off within a few years of its original release. This is the figure I intend to keep in my collection!
Posted by Mark Baker-Wright at 9:00 AM