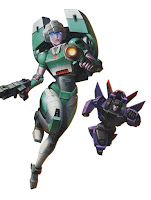 As everyone continues to spend more time at home, I have a couple more non-Ratchet medics to feature. Both are Transformers Collectors' Club exclusive toys that were the first official toys for their characters, but (as TCC toys tended to do) have histories that go back further.

Lifeline's history goes back to "Fight or Flee," an episode of the third season of the original Transformers cartoon. In the episode, a group of Decepticons crash-land on a planet of pacifists called "Paradron," and quickly take over the planet and force its inhabitants into slave labor. I can't let its simplistic "pacifism is dangerous" narrative go by without comment, but the important point for this entry is that, when the animators designed the medics on the planet, they simply reused Arcee's animation model (minus her behind-the-shoulder extensions). Although it took Hasbro nearly three decades to give Arcee an animation-styled figure of her own, once that figure existed, a redeco as a Paradron Medic was an obvious thing to do (in fact, the concept had been used roughly a decade-and-a-half before this figure, to reuse the Arcee PVC figure as a Paradron Medic). When the TCC created this figure, they took the extra step of making her a specific individual, giving her the name "Lifeline," and suggesting that she was, in fact, the last of her kind. 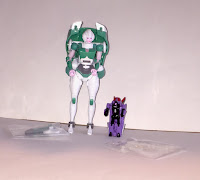 Lifeline comes with all of Arcee's accessories, although they are hard not to see as obvious weapons. Although the TCC made the attempt to rebrand them as "medical tools," I've decided to just leave them in their packages (not to mention that the Arcee figure was said to have issues whereby carrying the weapons caused damage to the figure, so I didn't want to take any risks with my exclusive redeco), and they're here in the picture just for completeness sake, alongside Quickslinger, the other history-laden figure in this set.

Quickslinger's history doesn't go back quite so far, but homages a custom creation featured in issue #7 of the TCC club magazine. Created by custom class guru Shawn Tessmann, the original Quickslinger was intended to represent a character that had cameoed in the previous issue's comic story... although the colors in the comic don't really match the custom. Nonetheless, that custom's colors and name were brought over to create this figure, which itself is a redeco of "Flanker," a small accessory originally made available with "Thrilling 30" Swerve (note that, although the "Quickslinger" name has also been used as a name for trademark-troubled Aerialbot Slingshot in recent years, there is otherwise no connection whatsoever to the Aerialbot character). 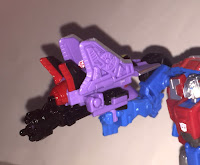 Since Flanker was designed as a Targetmaster-ish triple-changing weapon (besides having distinct robot and vehicle modes), Quickslinger is also capable of changing into a weapon. Besides the fact that, as already established, this is somewhat incongruous for the pacifist Lifeline to have as a partner, Lifeline's hands are actually incapable of holding Quickslinger in weapon mode, so that mode is here demonstrated by means of Swerve's redeco, Gears.

I imagine that there will be a need to be especially thankful for medics for a good while longer, but the fact is I'm starting to exhaust my supply of relevant characters (having covered a few in the past already!), so I'll move on to something different next time. See you then! 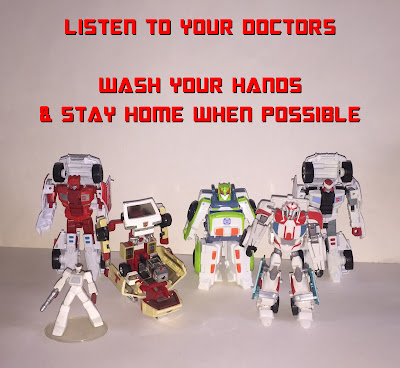