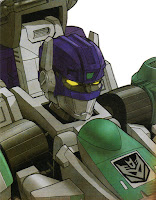 BotCon 2007 is well-remembered among Transformers fans for the boxed set of exclusive toys that came with it. While these toys were extremely popular, they were also extremely controversial. As I've written regarding Thundercracker (and elsewhere), most of the controversy surrounds the use of the "Seeker" jets in the set, thus consigning them to exclusivity rather than allowing them to be regular retail releases. I don't agree with this interpretation for a whole host of reasons, but this article isn't about the Seekers. Rather I'm looking to discuss a figure that has largely been ignored in this debate for over a decade now: Dreadwind. 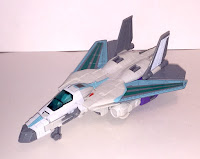 Dreadwind was created using the "Classics" Jetfire mold, which is widely regarded as one of the better molds to come out of that line, but includes many features that don't really seem to suit Dreadwind, in my personal opinion. The jet mode seen here is without the mold's booster pack added on. If you really want to see the booster pack, here's a shot with the booster pack added, and here's another one with the booster pack's weapons deployed, but the addition of the pack makes this toy look less like Dreadwind, and more like "purple Jetfire" (again, in my personal opinion). 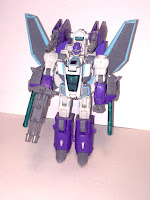 The robot mode is notable for featuring the only remolded head out of the entire BotCon 2007 boxed set. As such, it makes for a rather attractive Dreadwind, and the fact that Jetfire's booster pack adds shoulder cannons that Dreadwind never had before really doesn't hurt the idea of this being Dreadwind much at all. 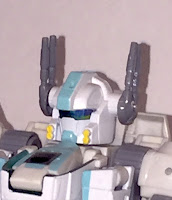 Less successful is the inclusion of Jetfire's G1 toyetic helmet, which again (if used) simply makes the toy look like a "dark Jetfire" and not particularly like a different pre-existing character entirely.

I don't mean to sound so negative. The toy really is one of the better molds for its era (and, indeed, of this boxed set), and gave us a new version of a character that, at the time, we thought we'd never see again. The fact that the people behind the Transformers brand have chosen in the decade-plus since 2007 to do more of these deep dives into the Generation One era—including the creation of both a new Dreadwind toy and a compatible toy of Dreadwind's friend Darkwing (minus the G1 Powermaster feature, but with the ability to combine the two jets into a single superjet named "Dreadwing"... admittedly a cobbled-together appearance, but the G1 toys were like that, too)—should in no way diminish the significance of what this toy attempted to do for fans in 2007.
Posted by Mark Baker-Wright at 9:00 AM