As the year 2018 comes to a close, it seems appropriate to comment on a pair of the most unexpected Transformers to come out of the year. Indeed, I would be so bold as to call these the most unexpected Generation One reissues of all time. I'm calling these two "Dairu" and "Zauru," as they were called in their recent reissues, but they are more commonly thought of as "Dial" and "Zaur" (allowing for a few alternative spellings). For all of the pictures in this entry, Dairu will be on the left, and Zauru will be on the right.

What makes these two reissues so unexpected? There are a number of reasons. First of all, these two have never been available in the United States before, having originally been created for the Japanese Headmasters line in 1987. Considered to be among the rarest of all Generation One Transformers, either one of these microcassettes could easily have been expected to cost over a thousand dollars on the secondary market if found boxed only a few years ago. I imagine that their value is somewhat lower now that reissues have been made available.

For another thing, there really isn't a precedent for Hasbro to do a Generation One reissue for a mold that hasn't already been reissued by Takara in the recent past, yet Hasbro not only reissued this pair before Japan did (indeed, I remain unaware of a Japanese reissue at the time of this writing), but they apparently went to the trouble of re-creating the molds from the original 1980's plans, something that has only rarely been done in the past. Usually, for a reissue to take place, the original molds have to have been located first. Neither Hasbro nor Takara usually takes on the expense of more than a refurbishment of existing molds. A wholesale recreation is unusual, to say the least. 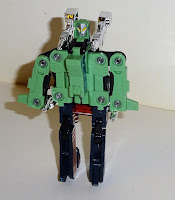 That's not to say that the re-creation was perfect. It seems that a part of the Zaur/Zauru mold was assembled incorrectly. This is most noticeable in the combined robot mode (unnamed in the recent reissue, but called "Legout" back in the 80s), where a piece of the robot's foot doesn't quite reach the floor properly. It's a minor problem, but not one for which a fix is known. Still, compared to the reality that an official version of these toys is now accessible for considerably less than a couple thousand dollars, the imperfection is a small price to pay.

That's not to say that acquiring these figures is exactly easy. It seems that, in order to justify the expense of recreating these molds, Hasbro engaged in a complicated marketing scheme. Not only were these toys packaged in with movie-Bumblebee toys as parts of larger sets, but each was packaged with a clear-plastic "opposite colors" variant of their partner, so if one wanted to get the pair of dinocassettes in their Generation One colors, you had to buy both sets, and thus wind up with two additional dinocassettes and two movie Bumblebee toys you might not have wanted. While one could easily sell these extra toys on eBay to defray the costs of getting this pair (as I did), this is undeniably a lot of extra trouble. That said, if getting exact colors isn't a huge concern, at least one (if not both) of these Bumblebee sets can still be found online fairly easily even as I write this, so if they interest you, go get 'em!
Posted by Mark Baker-Wright at 9:00 AM